A meme is an idea, behavior, or style that spreads from person to person within a culture.

Imagine the radioactive hazard symbol. The fact that you are imagining a yellow circle with a black center circle and three trapezoidal shapes at even intervals is a testament not only to the visibility of the ionizing radiation symbol but also to the definition of a meme. A symbol is a meme. It can communicate a vast array of ideas with its seemingly simple imagery. A word is similar to a symbol. A symbol is composed of lines and shapes and sometimes colors in order to communicate a complex concept within a small space, a word is composed of lines shaped into various letters when arranged in the correct combination communicates a concept. Words need to be known before they can be read, as is the case with symbols, but what if simply seeing a symbol instantly communicated what it was? 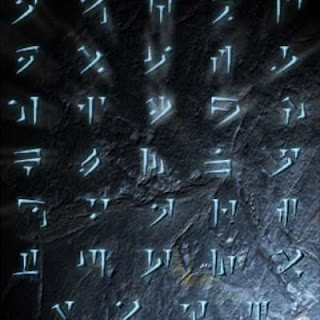 Imagine a word that doesn't exist. Flabonic. That's a word that doesn't exist. Except now it does, it exists now as an example of a word that doesn't exist. But it exists. Flabonic communicates nothing, other than it doesn't mean anything. We don't want to use an example word and I don't want you imagine a word anymore, we want to escape the language barrier, so instead: imagine a symbol that doesn't exist. I'm going to tell you what it means. When you see this nonexistent symbol your conscious mind reads it and tries to make sense of it and perhaps you dismiss it as a scribble or graffiti or garbage, but it plants an idea into your brain, the idea that your death is imminent and that it could occur at any moment. Seeing the symbol is simple and causes no reaction, but as the symbol is absorbed by your brain it dissolves into its component parts and attacks your thought process. Within a few minutes you start to fear that something bad is about to happen. Within an hour every movement and sound is causing you to flinch in fear as you await your death. You might try to accept this fate and just relax, this is going to happen and you can't stop it so what is the point in worrying about it, but this thought will be coupled with the thought that you might just have a chance to escape your death if you pay very close attention to what happens next and if you react quickly enough you can save your life for one more day. You may try to fight these thoughts, telling yourself it's all in your mind and you're jumping at nothing, but this thought leads you to think that it is while you are not paying attention that death will strike most painfully. Only if you pay attention carefully will you have a chance to evade your fate, which you know is certain and cannot be avoided, but if you don't pay attention then your fate will be slow and drawn out and you will suffer in agony. You are in a dungeon where the walls are scribbled with this symbol. As you venture farther down the symbol begins to take hold, and your progress is slowed by your own inability to act rationally, soon you have very little ability to act as you find yourself sitting in a corner of the dungeon awaiting what will happen next. The room you are in is littered with the bones of previous explorers who were all killed by something terrible in this room, and now you are here awaiting something terrible and it hasn't happened yet but it will any minute now, and you grow hungrier as the days pass but it could happen any minute and you need to stay alert. Best to just sit here and wait.

This is the terror meme. It paralyzes it's victims with fear and uncertainty. It is not magical, it is not a curse, it's a meme.

Perhaps you've encountered one of these memes, perhaps you will encounter a new one soon. Flabonic.
Posted by Patrick Mallah at Friday, November 06, 2015