the random spells of Freebooters on the Frontier

This Sunday we started a new game, a hack of Dungeon World called Freebooters on the Frontier that emulates the randomness of old school D&D fairly well.

I like the Spell Name Generator from Freebooters so much that I made a page for it on Abulafia. The Magic-User in the group rolled up two spells: Winyop's Door of Despair and Murzmut's Call of Steel 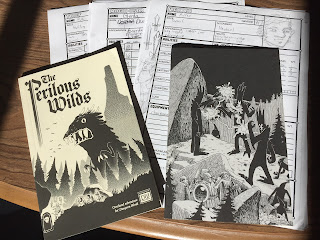 The beauty of the Freebooters system is that the spells can have a more malleable and open-ended use, provided you can fit what the spell does within the themed name of the spell. Right away, Murzmut's Call of Steel was being used to snatch swords away from enemies, fling weapons around in a magnetic tornado, and draw daggers out from small groups of kobolds so that they'd all stab one another. Winyop's Door of Despair was less useful in such a direct way, but I allowed the "door" it could create to drop magical liquid out from it so that the Magic-User could attempt to extinguish fires and scald enemies who were running from house to house, attempting to set the PCs' home village on fire.

I was drawing from the first chapter of Hoard of the Dragon Queen for inspiration, as I wanted the session to start with a tense fight. This is everything I wrote during the session: 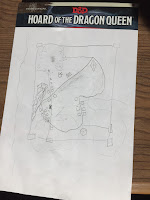 the village of Galapagos (one of the players named the village)
dirt poor, steady population, no militia, resource (balsam-pears), safe (village has walls from a collapsed keep), remote (large dwarven population), oath (to Cold Cliff Keep)
Temple of Rheezele, goddess of nature (and trickery)
the One Legged Cat, tavern
dwarven pathways: when a dwarf or halfling tries to sneak through the cracked walls surrounding Galapagos, roll+INT. On a 10+, you get where you want to go without being seen or heard. On a 7-9, you get where you want to be but not without being seen or heard. On a miss, some stones collapse and you're trapped in the pathway.
Danger: Siege of Galapagos
✓ the keep is surrounded (half the kobolds have been routed)
□ the mill burns down (currently on fire)
✓ the dragon attacks
✓ the dragonkin commander arrives (he was defeated)
□ the temple is set on fire
□ the south wall collapses
Impending Doom: the village is overrun

And that was enough to keep me busy. Next week I'll actually prepare some fronts to further this Hoard of the Dragon Queen adventure, but the critics are right: this adventure is not written well.

The PCs ended up capturing some kobolds, killing some cultists, and taking the blue dragonkin commander as their prisoner. When the keep was surrounded, Mirren and Matti routed the kobolds successfully. Gerda stole the dragonkin commander's sword before anybody was forced to fight him. The fire at the mill was extinguished, but when Gerda was forced to flee from the mill some kobolds set it on fire again. The dragon swooped around the village several times, and two sections of the village were set aflame by it's fire breath.

Just for fun, I also rolled up quite a few extra spells:
Ward of the Pestilential Boon, I imagine it could be used to bestow immunity from disease or infection
Cloak of the Bloody Curse, the first thing that comes to mind is a red cloak that permeates fear in others and/or causes harm to any who approach too closely
Binding Rot of Ingoth, paralyzing/destructive magic
Zza-leo’s Venom Blast, I would use this to spit poison at enemies or even trap objects to explode with a poisonous gas/spray

Character creation plus the PCs' home village being under siege was plenty of fun, and a welcome change from playing 5th edition D&D.
Posted by Patrick Mallah at Monday, November 09, 2015