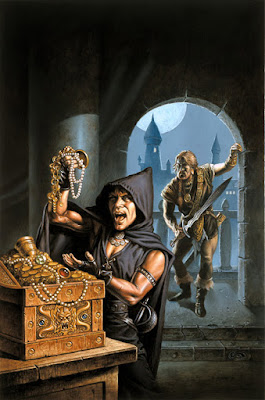 LANGUAGES
You start with 3 extra dialects, plus Thieves Cant.
You are illiterate.

MOVES you start with Guildwork, Rumble, and Sticky Fingers
Guildwork: when you turn to your guild for help or assistance, roll+Grace.
On 10+, you get what you want without a fuss.
On 7-9, choose 1:
• you have to pay for their help (the Oracle will set the price)
• you can't call upon the guild again until you perform a favor for them
• somebody challenges your membership, you won't get help until you deal with this upstart
On a miss, your guild demands your obedience and if you don't give it, you're out of the guild.

Sticky Fingers: when you are close to somebody and brush against or past them, roll+Grace. On a hit, choose 1:
• you lift something from off their person
• you place an object into one of their pockets
• you swap an item off of them and replace it with another similar item (take +1forward)
On 10+, nobody notices you doing this. On a 7-9, the Oracle chooses 1, but doesn't need to tell you what they choose:
• somebody (not your target) notices your odd movement
• your target will feel something is off and search their pockets
• the object you took is not what you thought it was
On a miss, you're caught red-handed.

Rumble: when you can recruit members of your guild to fight for you, roll+Moxie. On a hit you can recruit 15 guild members to back you up in a single fight (Damage:2 Armor:0 gang small), you don't control them but you can lead them in the fight and they will back you up and protect you within reason. If more than half of them die, they flee. On a 10+, choose 2. On a 7-9, choose 1:
• they show up in greater numbers (Medium instead of Small)
• they show up with decent weapons (+1 Damage)
• they show up in armor (+1 Armor)
• they fight to the death, instead of fleeing
On a miss, you can still recruit them to fight with no options, but your guild also demands obedience as if you failed a Guildwork roll. You might not be calling the shots when the fight happens.

Doubleback: when you are being chased or need to hide, roll+Grace. On a 10+, you get away clean, quickly, and quietly. On a 7-9, you get away but choose 1:
• you left a trail that can be followed
• you need to spend time to get away
• you hurt somebody in order to conceal which way you went
On a miss, they know exactly where you are and they're closing in.

Education in Earnest: you can attempt to read script, even translate ancient or dead languages, by spending time, roll+Grace. On a hit, you understand the basic message of the script. On a 10+, you translate it quickly and the Oracle will give you good detail. On a miss, you have wasted time with these scribbles and the Oracle may bring consequences with it.

Mysterious Figure: you can attempt to Convince or Manipulate an NPC without them even knowing who you are.

The Fagin: when you use Rumble you get +1 option, even on a missed roll.

CRIMINAL SPECIAL
When another player helps you get away (or similarly protects you) from the authorities, you get +1 Bond with them.
When you steal something worth 1 Gold or more and give it to your Guild without taking a cut, mark 1 xp.

BONDS
Tell everyone to mark you at -1 Bond.
Whatever numbers they tell you, add 2
Additionally, you may ask "Which one of you cheated me out of money?" subtract 2 from whoever says they did.
Posted by Patrick Mallah at Wednesday, April 20, 2016 No comments: 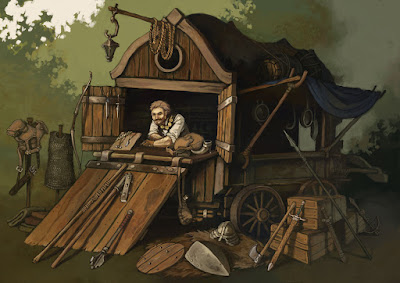 LANGUAGES
You start with 4 dialects.
You are literate.

VARDO
A Vardo is a kind of wagon, a mobile home that also functions as a shop. At start, your Vardo is pulled by two mules.
What kinds of things are in your Vardo? (pick 2 or 3)
• weapons, armor & shields
• jewelry
• artwork & mementos
• intoxicants, delicacies & poisons
• books & maps
• plant & animal specimens
• castoffs & knick knacks
• something else?
Your Vardo begins play with Size+2 (min. -2, max. +4)
If your Vardo is Size=0 or smaller, take -1ongoing.

As long as your Vardo is Size 1 or higher, you can spend time on the side of a road, in a bustling market, or between sessions (if there is appropriate downtime) to sell wares from your Vardo, spend time and roll+Size. On a hit, you earn 1 Gold by reducing the Size of your Vardo by -1, you may do this down to Size=0. On a 10+, you earn 1 extra Gold, even if you don't reduce your Vardo's Size at all. On a miss, you only earn 1 Gold and your Vardo is reduced to Size=0 or gets -2 Size, whichever is worse.

MOVES you start with all of the moves associated with your Vardo, then choose two more

Acquisitive Eye: when you see, hear about, or otherwise come to know of a thing you want, roll+Insight. On a hit, ask the Oracle questions. On a 10+, ask 3. On a 7-9, ask 2:
• How can I make this mine?
• Who will stand in my way?
• Who will try to take it from me?
• What is this truly worth?
On a miss, ask 1 but your face and body language betray your interest in the thing to anyone who's paying attention.

Bammed Booze: name somebody who might have just finished or just be about to eat, drink, or handle something that has had your attention and roll+Might. On 10+, you've poisoned them, and they suffer 4 Damage AP (soon or within the next day, your call). On a 7-9, it's 2 Damage instead. On a miss, you've poisoned somebody else by accident, maybe several somebodies, the Oracle says who, and they suffer 3 Damage AP right now.

Confidence Game: when you attempt to impersonate somebody of importance (whom you are not!) through sheer guile or bluster, roll+Moxie. On a 10+, your deception works, for now, but the Oracle may test you again later or if your assumed persona begins to slip. On a 7-9, they suspect you're a phony, choose 1:
• They maintain the upper hand if your disguise collapses.
• They are wary and alert for any misstep.
On a miss, they see through you and the Oracle makes as hard a move as appropriate.

Friends In Low Places: whenever you enter a bustling marketplace, you may choose to roll+Moxie.
On a hit, people here have heard of and recognize you, and you say what they've heard; the Oracle will have them respond accordingly.
On a 10+, choose 1.
• somebody here owes you money
• the marketplace is ripe, you can restock your Vardo here
• someone brings you rumors of trade and plunder
On a miss, they've heard of you, but the Oracle will decide what they've heard.

Greed: when you're defending your Vardo from thievery or destruction, you have Armor:2. If you're already wearing armor, use that instead.

Honor Among Thieves: when you're surrounded by bandits or worse, if they can understand what you say then you can Manipulate them using your friendship as leverage.

The Best Investment: when you make a Vardo move, you can choose to skip the roll and take a miss result. Each time you do this make a Mark. These Marks can be spent to add +1forward to later Vardo move rolls. There is no limit to the number of Marks you can accrue.

Words Are Weapons: when you Intimidate, you may roll+Moxie instead of roll+Might.


MERCHANT SPECIAL
When another player wants something and you get it into their hands for free, you get +1 Bond with them.
When you swindle an NPC out of money or property, mark 1 xp.

BONDS
Tell everyone to mark you at +1 Bond
Whatever numbers they tell, add 1 to it
Additionally, you may ask "Which of you has worked for me?" add +1 to whoever says they did.
Posted by Patrick Mallah at Tuesday, April 19, 2016 No comments: 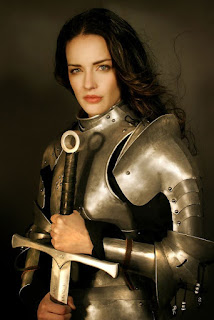 LANGUAGES
You start with 3 dialects.
You are illiterate.

MOVES you start with Favorite Weapon and then choose two more
Favorite Weapon: When you have your Named Weapon in your possession you cannot be disarmed or have your weapon taken away, unless you are knocked unconscious or you give it away freely. No magic or illusions will separate you from your Favorite Weapon.

Bloodthirsty: when you inflict violence and roll 12+, you can declare your opponent defeated and at your mercy, maimed, or dead.

Desperate Cry: when you pray in the heat of battle, roll+Magic. If you've suffered 1 to 3 Damage then take +1 to the roll, if you've suffered 4 or more Damage then take +2. On a hit, the Oracle must answer questions about what or whom you're fighting. On a 7-9, one question. On a 10+, all three:
• how can I survive this encounter?
• what do they want?
• what is their weakness?
On a miss, nothing gained, and the Oracle doesn't make a move either.

Fearful Presence: when you try to Convince or Manipulate an NPC, you may roll+Might instead of roll+Moxie.

Field Medicine: when you treat the wounded, roll+Insight. On a hit, you stabilize them. On a 7-9, they choose 1:
• they fight you from the pain, take 1 Damage and adjust Bonds accordingly.
• their course of recovery will be slow. All natural healing takes 1 extra day of recovery.
• they owe you for your time, attention, and spent trappings. Tell them to add a +debt to you.
On a miss, they're not stabilized and they take 1 Damage AP right now.

For Hire: when you put the word out that you're looking for work, the Oracle might tell you to spend time, but either way roll+Insight.
On a 10+, you get as many job offers that the Oracle can think of, but she can choose one for each job offered. On a 7-9, you get one job offer and you choose two, the Oracle will tailor the job description based on your choices:
• it's dangerous
• it doesn't pay a lot
• it'll take a long time
On a miss, you get one job offer and all three.

I Wasn't Always Like This: take a move from another playbook. (During initial character creation, choose it from a playbook that isn’t otherwise in play.)

MERCENARY SPECIAL
When another player fights to preserve your life without promises of payment, you get +1 Bond with them.
When you satiate your lust for carnal knowledge, mark 1 xp.

BONDS
Tell everyone to mark you at +1 Bond
Whatever numbers they tell, add 1 and write it next to the character’s name.
Additionally, ask yourself which of the other players' characters you trust the most, set your Bond to them at +3. 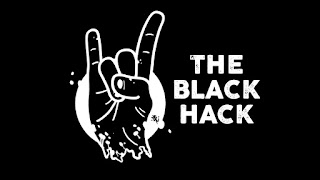 It was a fast read, and I like a lot of the streamlining. You can tell the author loves D&D but doesn't like getting bogged down with minutia and fiddly rules. It's still basically a D&D game, but it's a lean, fast beast. Even leveling up is simple and quick. When I finished reading the spell lists it made me want to run Dwimmermount again.

For less than $5 you can get the Black Hack and two supplements with a "procedurally generated" village and extra classes.
Posted by Patrick Mallah at Tuesday, April 12, 2016 No comments: