I've been playing a lot of Destiny the last three weeks. If you're not interested in first-person shooters or MMO-like video games, you can stop reading this now.

My wife had a 40th level Warlock up to 290 Light, and my Titan was still lagging behind at 18th level. She was always complaining that she couldn't do any of the high-level raid content because rando players would always bail or flake out in the middle of a game. I decided to sit down and start playing through the story missions, trying really hard to max out my Titan's level. I hit 40th within a few days but my Light level was still below 200, hovering around 150, so I started investigating what I needed to do to raise it and the most obvious solution was to start playing the multiplayer content. That's where all of the best gear was! 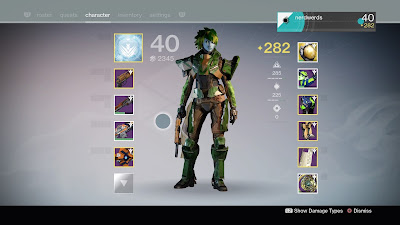 But I hate multiplayer games, mainly because I am really bad at them. I don't have the time or energy to devote myself into playing matches against other obviously more skilled players. I always lose multiplayer matches. So I looked for alternatives.

Destiny has factions that you can improve your standing with by fulfilling daily bounties and completing inexhaustible patrol missions for. I joined a faction - the Future War Cult - and started raising my reputation. In only one week I had a high enough reputation rank with FWC to buy the best gear they offered, but I was still missing Legendary Marks to buy them with.

How do you get Legendary Marks? You guessed it: multiplayer. 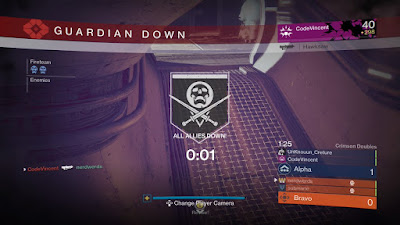 Every day there's a different multiplayer event that grants varying amounts of Marks, and I would join a team and do the best I could and if we won I would get some Marks. It was going to be slow, but this is an MMO-like game so I accepted that. An hour or two a day dedicated to playing multiplayer matches seemed okay with me. I would skip any free-for-all deathmatches because I suck, so that slowed me down a little.

Last weekend the game had a Valentine's Day themed event called Crimson Doubles. 2-man teams fighting against one another. My wife and I played these together and we lost a lot. We would start the matches psyched and with a lot of energy then suddenly burn out and lose the long game. Crimson Doubles required that your team win 5 rounds, a match could last as many as 9 rounds. We would tend to win 2 or 3 and then the other team would come back and shut us down. Occasionally we would win, but it was always drawn out, and when we would lose 4-5 it was so damn frustrating. I almost broke my controller once throwing it to the floor.

I decided to stop caring about winning and just tried to complete my bounties related to the event. But then something happened, we started winning. By the third day of the event we were dominating the Doubles matches. We had learned the layout of the arenas, we were communicating effectively, and we were shutting down the other teams consistently. We won our last four matches solidly and our last two matches were complete shutouts, we won 5-0.

Then at the beginning of this week one of the multiplayer events that gave out Legendary Marks as a reward was a free-for-all deathmatch, and I decided to play it. In the final ranking I came in 2nd place, and only because of a floppy melee assault that didn't connect against the 1st place winner. I was literally one punch away from 1st place. If I had been a little closer, or if I had turned left instead of right, I would have come in 1st.

For the rest of this week I've been tracking my scoring and I'm always one of the top three players, regardless of whether the match contains 6 or 12 people. I've only ranked 1st once (see below), but I'm always consistently 2nd or 3rd. And now my Light is up to 282. 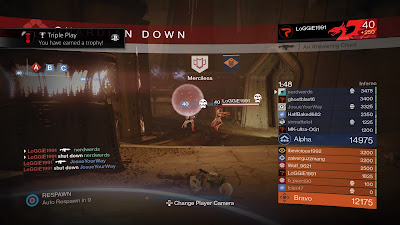 I'm better at this game than I thought I was.
Posted by Patrick Mallah at Saturday, February 20, 2016 No comments: 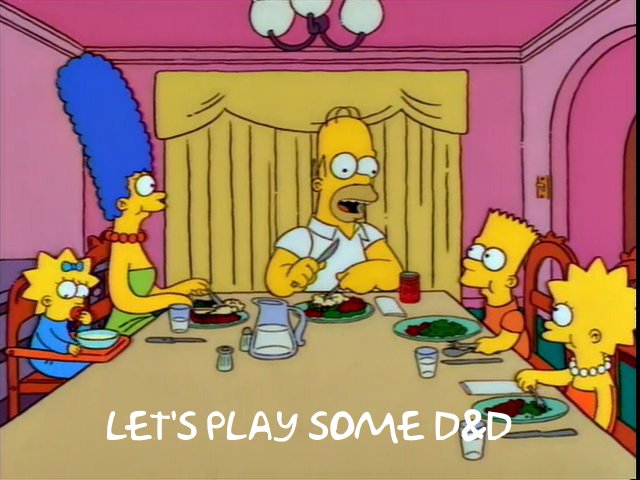 Posted by Patrick Mallah at Friday, February 05, 2016 No comments: