Most people in Marakāven are human, though a handful of masadhi come and go with travelling caravans. The city is on the coast, and the outer districts are made up of small islands, most of which are connected by ornate, incredibly long bridges constructed in a previous age. The southern side of the city is walled by an immense mountain range, and on the lower slopes where these mountains begin many of the wealthiest families live and look out over Marakāven. The mountains of the Crown can be seen on the northern horizon, and smaller communities of dense townships connected to Marakāven spread upward along the coast, on a map the dots are a blood spatter of civilization. 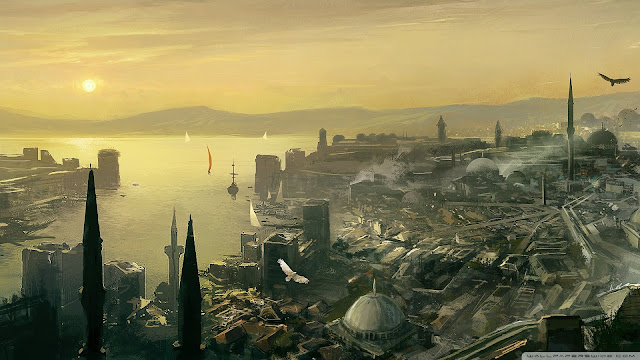 Most of the buildings in Marakāven are constructed out of stone, but the outskirts are built out of wood. With no outer walls, the elite of Marakāven rely on a great river for protection which splits the city into northern and southern sections. The north of Marakāven is a compact archipelago of islands, all of which are joined by bridges of various sizes and differing artistic license. Some of the buildings tower over the islands, connecting into the buildings of neighboring islands.

Marakāven is divided into six districts:
Central, while it is not the true center of the city this district covers the biggest area as most of the islands that make up the northern archipelago fall within the Central district;
Mountainwall, where the city's nobility lives, a collection of buildings and castles built into the side of a mountain hugging the southern end of the city;
Portside, the coast of the city's southern section and where most of the city's trade is conducted, if you're looking for a bank or a storefront you can find it in Portside;
Rum Barrel, a "newer" section of the city where the homes are mostly simple wooden structures and where much of the city's labor force lives;
Scorpion, this small district comprises the northernmost islands of the archipelago where the city's buildings are tightly packed together and the canals are too thin for all but the slimmest boats to pass through, it is named for an infestation of water scorpions that once plagued the city;
Statue, the section of islands just north of the Crowkut River that also serve as port of calls for the city's trade so named for the prominent statues erected on every island - the Ghost Tower falls within the Statue district.

The shore of southern Marakāven is the primary trading port for the city. Almost all of the city's nobles live in the southern districts, Portside and Mountainwall. The southern districts are cut off from the mainland by the sheer face of the mountain, and the Crowkut River separating them from the rest of Marakāven.

Some of the bridges on these islands have stiff outer gates, making the residents capable of cutting off their island from their neighbors, while other islands have ways of collapsing their bridges and still others have no methods of protecting themselves. The ornate geography of how these islands connect together makes Marakāven a difficult city to pillage, but since the city extends onto the coast and has no outer walls the poorer districts have fallen victim to sieges and raids. The south of Marakāven is connected to the north by three large bridges left behind by the city founders. With so few access points to the southern districts of the city, the locals have become adept at protecting what is theirs.

Though magic was obviously used to construct parts of Marakāven's housing and many of its bridges, magic is today a rare commodity. There are a few magicians in Marakāven, but they either operate under a pseudonym or they are noble and can afford to protect themselves with guards and the relative safety of a home in Mountainwall. Any open display of magic will cause awe, surprise, or fear in the common citizenry. Trying to pawn an item as magical is more likely to make a merchant assume you are a crook, or a simpleton.

Castle Coldtrail sits at the top of the Mountainwall district and is home to Queen Enves Maliri, a skilled fighter and rumored sorceress. Her family owns or controls almost all of the land surrounding Marakāven, and plenty of properties within Marakāven itself. A parade of commissioners work under her direction and each governs their own section of the city, divided up into municipalities that seem to change and shift borders from month to month so that the commoners are never entirely sure who exactly represents their interests.

The younger sister to Queen Maliri is Princess Yvette, she resides in the Blue Tower of Castle Coldtrail and she is in command of the royal guards. Many believe she is a magician as she frequently hires mercenaries for work outside of the city who recover trinkets and artifacts from Wuunrlaan cities. She is a collaborative patron of the arts and her tower is often populated with artists who are also possibly her lovers. Though she never leaves the Blue Tower and has absolutely no interest in taking the regency from her sister, stories and rumors swirl about her intrigues with the other noble families. To receive an invitation to her parties in the Blue Tower is a prestigious honor that any noble would kill for, and a few have. 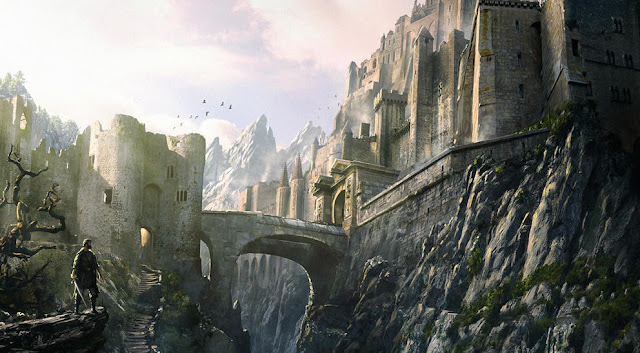 Trade, commerce, and production are all controlled and dictated by guilds and the nobility. Each island has it's own guilds for every profession and due to their territorial and competitive natures none are willing to cooperate with similar guilds on neighboring islands. This is exactly how Queen Maliri wants it, and keeping the guilds and their attendant nobles fractured is how her family has maintained control over Marakāven since they rose to power two centuries ago.

The Church of Sanglorius - the Proud Savior, the First Man, Creator of All Life - handed down from an oral tradition, they believe Sanglorius created all of humanity and strove for perfection in all things. The tales of Sanglorius are filled with sex and violence as he is said to have been an undefeated fighter and took many lovers. There were once temples to Sanglorius everywhere in Kosranon and his symbol can be seen in some of the ancient architecture of Marakāven. The Church now operates out of these buildings associated with his symbol and is strongest in this part of the world. Priests are trained fighters and many temples double as dojos for martial combat practice.

The Divine Heritage of the Three Kings - this church has a small presence in Marakāven and many of the locals are wary of them, even as they grow in numbers. Rumors of their church's crusades in the far west have reached Marakāven and nobody wants to see a holy war pour out into the streets and canals. The Divine Heritage has set up several churches within the Rum Barrel district.

Cults are everywhere in Marakāven, and though they are not technically illegal they often come to blows with Templars of the Divine Heritage or overzealous devotees of the Sanglorius Church so most do not advertise their presence.

Openly carrying weapons is illegal throughout the city, and city guards have the authority to execute anybody they feel is hindering their duties or causing a danger to themselves or others. People who carry weapons either keep them concealed or risk being arrested. City guards, however, don't patrol all of the neighborhoods and are more common the further south in the city one goes. Nobles often carry weapons for dueling, but also never venture far without a bodyguard or two.

There are few laws in Marakāven, anything that obstructs trade or imposes upon the nobility can be considered a crime. There are laws to protect the common citizenry, but city guards are often subject to bribery and will often look the other way if a noble is abusing one of their lessers. The harshest punishment that can be meted out by the courts is for a person to walk the Ghost Tower. Since nobody has ever returned from the Ghost Tower, this is assumed to be a death sentence.

Cities that serve as inspiration for Marakāven: 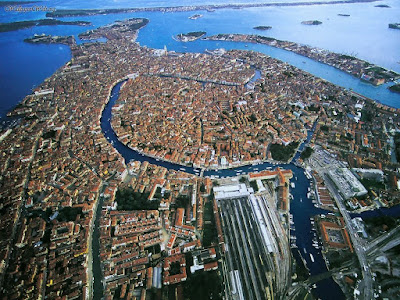 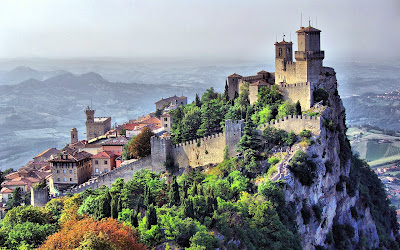 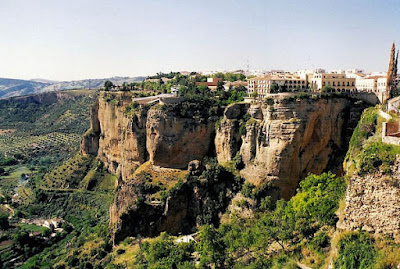