I turn 39 today. I've been gaming since I was 7 years old, and if you count video games then a few years longer than that. I'm pretty sure the first time I played Pac-Man I was 3. These last few months I've been clearing out boxes and dusting off old books, figuring out if I should really keep six bookcases worth of games lodged around my house. Part of this housecleaning means I keep finding old notes that I wrote, some of which date back to my teenage days. This particular list of notes rested on a single page, and I remember it was stored in a .txt file that I could print off easily from my computer. The .txt file no longer exists but this one page still does.

I'm almost embarrassed to transcribe these, but I was only 17 years old so what the hell?! This is word-for-word what was written on my printout. Modern commentary will be in italics. 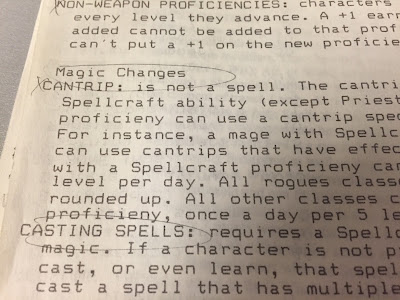 ALL CHARACTERS: regardless of PC or NPC status, receive maximum HP for first-level.
AT 10TH-LEVEL, ALL CHARACTERS: must complete secret "special" quests which I assign to them before they can raise to the next higher level. These quests will always involve playing "in character," following your set alignment, completing a goal you've set for your character, etcetera, and so on. Upon reaching 10th-level, your character may begin to have certain "feelings" that I'll tell you about. These will often be pointing you in the "correct" direction. I don't know why I'm excessively using quotation marks. I also don't remember actually ever handing out any of these "special" quests.
FALLING DAMAGE: is revised from the "official" rulebooks. My system is more elaborate, and also more damaging. I remember having these rules but I don't remember what they were.

SPECIALIST WIZARDS: get a +15% bonus to learn spells in their school of specialty, and receive a -15% penalty to learn spells in the opposition schools of their specialty. Specialists CAN casts spells from opposition schools, except in certain instances where the class warrants special spell usage (i.e., Magician class from BIRTHRIGHT, Preservers and Defilers from DARK SUN, etc.). Nobody ever played a specialist in my games.
THIEF SKILLS: can be brought above 95%, but, when rolling for successful determination, a roll of 96 or higher is always a fail. This is so the PCs can have superhuman scores, so that when penalized heavily they might still have a chance of success.
BARD KITS: do not get any True Bard skills when choosing a kit, except the Legend Lore ability, which all bards have access to. Nobody ever played a bard in my games either.

AMBIDEXTERITY: is open to all classes. This Weapon Proficiency allows the character to use a weapon in each hand with only a -2 penalty in the "off" hand. Basically, Rangers get this proficiency for free. I don't remember anybody playing a Ranger either.
NON-WEAPON PROFICIENCIES: characters get a +1 to put towards any proficiency every level they advance. A +1 earned at the same time a new proficiency is added cannot be added to that proficiency. For instance, at 3rd-level you can't put a +1 on the new proficiency you just learned. Was this a rough draft?

CANTRIP: is not a spell. The cantrip is an ability granted from any Spellcraft ability (except Priestly). A mage, or other character, with the proficiency can use a cantrip specific to the school he has Spellcraft with. For instance, a mage with Spellcraft-Illusion and Spellcraft-Conjuration can use cantrips that have effects indigenous to those 2 schools. A mage with a Spellcraft proficiency can use a number of cantrips equal to his level per day. All rogue classes with Spellcraft get half that number, rounded up. All other classes can use a cantrip, with a wizardly Spellcraft proficiency, once a day per 5 levels. The influences of Mage the Ascension
CASTING SPELLS: requires a Spellcraft proficiency related to the school of magic. If a character is not proficient in a school of magic, she can't cast, or even learn, that spell. However, if a character wants to learn and cast a spell that has multiple schools, but ONLY one that she is proficienct with, she can still learn and cast the spell. Priests need only learn a a Spellcraft proficiency for Priestly magic. I remember somebody playing a wizard and being really cross that the cleric didn't have to use as many proficiencies on magic.
WIZARD SPELLS: can have double the number of memorized spells (5 minutes to memorize one level of spells) and when casting can use a spell multiple times that they've memorized once. Memorized spells are lost after 2 days and must be re-memorized.
MEMORIZING SPELLS: can only take up to 4 hours of the wizard's time a day. Or else, the mage suffers a -2 cumulative penalty to THAC0 and proficiency scores for each hour spent in "extra" study. This means, a mage is limited to memorizing 48 levels of spells per day. I don't remember why that limit was there, seems arbitrary at a glance.
Posted by Patrick Mallah at Saturday, November 07, 2015