I quit playing games, cold turkey. I cancelled the game I was GMing and stopped making any attempts at attending other games. I switched jobs and am no longer working the graveyard shift. Why? In June of last year, I started performing standup comedy and writing & performing jokes has increasingly occupied more of my free time.

There are only a few consistent open mics where I live but after months of attending them with new material every other week I think I could probably perform 10 minutes of comedy if I was prepared. I doubt how good the entire routine would be, some parts are strong and some are weak, but if I had to fill time then I'm confident I could fill 10 minutes with jokes that I know, that have mostly worked, and have a tenuous connection to one another.

The central problem to performing standup is that at the main comedy club open mic (where normal non-comic people go) I only get to perform in quick 3-minute chunks. When I write I often have a bit that lasts beyond 3 minutes, and when I rewrite I'm often spending time trying to whittle it down to 3 minutes. Crafting one-liners, or lots of laughs in a short amount of time, is the hardest thing to do and I do the opposite of that. I have been compared to Norm Macdonald more than once. That is, my bits are long and rambling and usually punctuated with cute or witty affectations leading to a primary punchline for the entire bit. The other open mics throughout the week offer more than 3 minutes, but only 4 or 5 minutes, and since I am always crafting material to work within 3 minutes I often find myself calling the MC back up to the mic before my time is done. 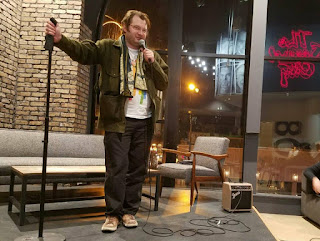 For a few weeks I was writing pieces with rather weak jokes and I felt like I had already hit a rut. I think perhaps I am still trying to find my standup "voice," but increasingly I've tried doing things that are weird or esoteric. I changed my shirt during one routine and I pretended to order a pizza and get into an argument with the person taking my order in another routine, and recently I started doing a set where I pretend to have an angry flashback. These were at least entertaining even when they weren't getting laughs.

I have had several comics tell me they're initially confused when I begin a routine that doesn't seem like traditional standup. To that I usually reply "Well, you're gonna have to raise your game a little then." Except it is entirely understandable. Doing something strange or confusing can throw people off and it takes time to analyze a piece before it can really rest on the stage. And thus the dilemma, performing strange material within a 3 minute time period that can be grasped quickly and still manage to be humorous.

When I first started I felt like maybe I just suck at the comedy game. I can get laughs at the comedy club, but with the other comics most of my material falls flat and I began to feel that if I can't get the comics to laugh then maybe I'm just a hack. Then, in October, when I was considering quitting, Louis CK walked into the comedy club, he settled into a seat literally arm's reach from where I was sitting and I barely had time to process what was about to happen: I was about to perform standup comedy in front of Louis CK. I had just enough time to think about whether I should change what I was about to do. I had material that I knew would work, but I wasn't prepared for it and I had less than 3 minutes before I would be called up to the stage. I had prepared to do my weird "order a pizza" bit and then this thing about the election where I have a conniption and the words coming out of my mouth all begin to slowly cohere into a single shouted growl. I decided to just do what I had prepared for and if it bombed, oh well. 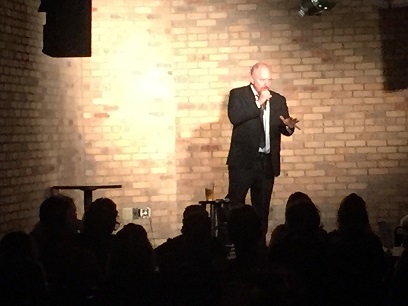 I got laughs, it worked better then I expected, and I was emboldened after the pizza bit because I could hear Louis CK guffawing loudly at the back of the room. When I walked back to my seat he reached out and stopped me in my tracks, shook my hand, and said "That was great! Good job." and all I could do was sheepishly say "Thanks" and sit back down. I got the impression he wanted to say something else to me, and I felt like saying more, but by now all of the comics knew he was in the club and they had begun gathering near or behind his seat like a crowd trying to glimpse their new prophet, and I didn't want to be just another comic intruding on his space. But to have the guy who is considered the top of the industry stop me to tell me he liked what I did, you can't imagine how great it feels.

I've been doing this for half a year now and I've always wanted to write sketch comedy, my old youtube account is a testament of my wrecked attempts at this, but somehow I feel closer to doing that now than ever before in my life. All it took to get my muse back was standing on a stage to tell a few jokes.
Posted by Patrick Mallah at Monday, January 30, 2017 1 comment: