Two years ago, my wife and I visited Seattle, as a prelude to possibly moving there. I have friends in Seattle, I had never been there, and I wanted to experience as much of the city as I could.

I didn't get to do everything I wanted to do, but I returned home looking at the budget for moving there. I bought boxes for storing and shipping my collection of game books, and when I ran out of boxes I bought more. I ended up with 25 boxes of books, which I moved into my basement, and I still had a bookcase full of books!

I made the decision to get out of debt before trying to move out of state, and so I've spent the last two years trying to do that and during that time I would occasionally need a book that was down in the basement, in a box, and if I really wanted the book I would go downstairs and hunt for it amongst the boxes. If I felt like I could make do without it, I would just wing it or use a digital copy of the book.

In December, I decided to pull all of my boxes up out of the basement, and as I pulled books out of the boxes I started to wonder "Am I ever going to play this game again?" and "Why do I own this? I'm never going to use it!" I started putting books back into the boxes, with the idea that I would sell the entire box and ship it to whoever would buy it, as is. There's not much of a return in selling in bulk like this. I've probably spent about 20 grand on gaming books over the last 20 years and in selling half of my collection I think I've only made about 5 grand. I had a lot of rare, collector's items, but I also had a lot of filler and cheap books. Most of it's gone now.

Here is an obligatory picture from before the purge: 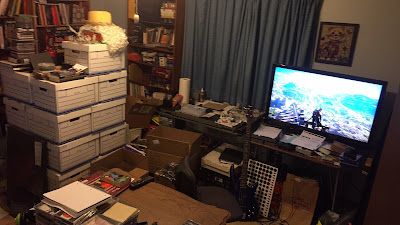 At the moment, I have two bookcases that represent the books I am keeping but I would like to get it down to one - this doesn't include board games or miniatures because they aren't selling so well. I put eight board games up for sale and only two of them were bid on. At some point, I may just give the games away to clear out space.