The stories about gods are the stories of cultures.

When ancient Romans prayed to the goddess of sewers, Cloacina, they might have been praying to a woman to unclog their toilet, but they were only praying because they had invented toilets to make their lives easier, and having the toilets meant that some higher power also needed to represent them. In the same way that modern people complain about, praise, or invoke the names of Apple, Tesla, Disney, China, or the Green Bay Packers. I think that we place a lot of stock into the relationships of corporations, without ever knowing the names of the people who make decisions or come to agreements that lead to corporations merging, cooperating, or becoming rivals. Huge faceless powers, governed in alien corners, whose methods and drives are seemingly inscrutable. In this way the modern companies are to us what the misunderstood motivations of the universe were to the ancients, deities.

Thus, I have taken a history of several companies and applied random themes to them, and over the course of their histories I make associations with their movements that could be considered narratives:

With this vague history, I have a litany of things to draw upon and create culturally for my fictional world. I can extrapolate modern motivations and transform them into a fantastical setting.

The Sky god is worshiped by the expansionist empire that subjugates all of its neighbors.
The Mountain god is dead, his worshipers have been fully assimilated by the imperial culture.
The Blind god is revered by desert-dwelling nomads.
The Sea god is revered by traders, merchants, and pirates who sail along the rivers and coasts, the primary link between the nomads and the empire.
The Forest god is revered by empire-subjugated hunters and farmers, the nomads and the merchants think of the farmers as a misguided people, much like their deity of choice.
The Snake god is worshiped in secret.

And with that I have a vague history of the world, places that have clung to holy names for their cultures draw upon these deities' representations, yet they are all connected because these people are all connected. It doesn't matter if I draw these deities up as beings in some version of D&D, or just let the idea of this culture fester in my mind as a world ready to explore. All it took was looking at my own current culture and it's history to create a wholly new one.

(special thanks to wikipedia for having really detailed histories of companies)

Posted by Patrick Mallah at Wednesday, February 23, 2022 No comments:

purchasing from multiple stores online on a Friday evening! this is probably of no interest to anyone but myself, and I wanted to track this information for my own understanding, as I would sometimes order a book and forget about it before it arrived in the mail

here is how I rank them,

Spear Witch and Monkey's Paw have the same layout on their stores, which implies that these are truly independent sellers operating out of a storefront or home, the other stores all had unique layouts

Spear Witch gave me a tracking number within hours, but this was merely for a label that had been created. I don't know if this was done manually, but either way they are already one step ahead of everyone else.

The next day I get a message from Sean at Tuesday Knight Games thanking me for being a repeat customer. This appears automated since there is an unsubscribe button.

On Monday, TKG, EF, and IPR all sent me tracking numbers for my orders, but these are all for labels that were created. Monkey's Paw is shipping from Canada (I'm in the US), but also appears to be in the same situation.
Only the package from Spear Witch is listed as departed and on it's way.

On the following Tuesday, the order from Monkey's Paw arrived.

On the next Thursday, both Tuesday Knight Games and Exalted Funeral arrived.

almost perfectly balanced on good and bad points, but I'm inclined to favor fast delivery over pdf availability as I'm purchasing from them for the physical books, my final rankings for each:

Posted by Patrick Mallah at Saturday, February 19, 2022 No comments:

Email ThisBlogThis!Share to TwitterShare to FacebookShare to Pinterest
Labels: review

I wrote a playbook for Apocalypse World, you can find it by clicking here 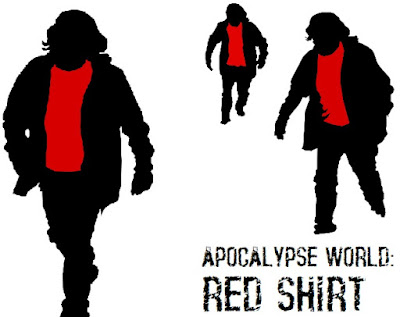 Posted by Patrick Mallah at Friday, February 11, 2022 No comments:

During my last gaming session I was reminded of a mechanic in the Forbidden Lands RPG, players’ characters have an attribute called Empathy, and this measures a character’s personal charm and ability to manipulate others, the skills associated with Empathy are called Manipulation, Performance, Healing, and Animal Handling … sort of broad, but each is meant to reflect the ability to read others’ emotions and adapt behavior accordingly, hence: empathy! Combat in Forbidden Lands usually lasts until someone falls unconsciousness and death is almost never an immediate consequence of combat (there’s only a 2% chance), most commonly someone falls to the ground in a Broken state, or they are Exhausted from fighting, or in rare circumstances they become Paralyzed or Breakdown from fear or despair …. Death is rare! The thing that I really like about Forbidden Lands, and about Empathy, is that when a player’s character wants to kill a defenseless foe, someone who is considered sentient or intelligent, then the character needs to fail an Empathy roll – and even if the roll fails the player must still have their character spend a point of Willpower and suffer a point of Empathy damage in order to kill the opponent. “Killing in cold blood is not as easy as you might think.” the rules say. This is somewhat incongruous with the type of game that Forbidden Lands is, but I feel like this could be built upon and expanded. Death takes a toll, even from those who deal it out.
Posted by Patrick Mallah at Thursday, February 10, 2022 No comments: