a new edition; a new game

There's a new edition of Apocalypse World, and with the new edition I felt like maybe I should update the playbooks I wrote. I haven't (yet) but what I have done is start playing again. I was told by one of my friends that Apocalypse World was her favorite tabletop RPG and so I offered to MC a new game as long as I didn't get too many players - the last time I GMed there were 8 people playing and that's just too many in my opinion. Somehow I only managed to whittle it down to 6 players, but yeah, I'm playing/MCing Apocalypse World again.

I wanted to keep the game simple at first by only using the core 11 playbooks - Apocalypse World Basic - since half of the people in this game have never played Apocalypse World, or tabletop RPGs in general, before. I did a little prep for the game by making little intro cards for each playbook. I took the first few pages of the Basic Refbook and edited out the page numbers, then printed them off, cut them out, and taped them to index cards. Like so: 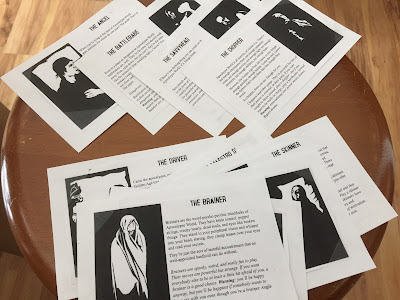 One player was disappointed he couldn't start out as a Show, but in all honesty I hadn't even looked at the Extended playbooks yet and I wasn't comfortable using the extra stuff until after we had established a basic game, he ended up choosing a Skinner.

Using a similar technique to when I started the Apocalyscotia game I handed a stack of picture cards to the players and said "Take a picture, lay it down, and tell us something about this location" and we went around the table - each player placing their picture next to an already-placed picture - defining a few communities as we went. 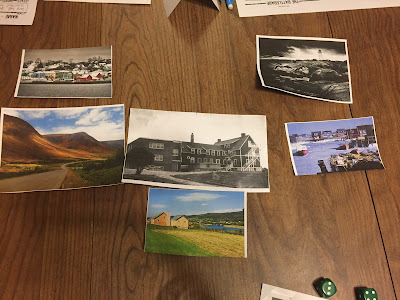 It was a fun first session, with lots of good details brought in. I tried to keep my questions directed at the characters rather than the world or what was in it. And I got contradictory information from some players which helped generate a few of my 'first session' stakes questions.

Bringing it, MCing the fuck out of this #apocalypseworld game! 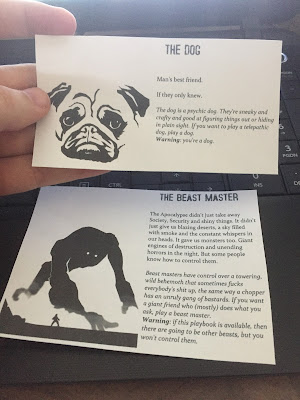 ...and that sort of commits me to updating these playbooks now!

Also, what sort of advice did I write for the Extended playbooks? I'll show you.

Faceless are the scariest dudes. Their moves are brutal and unrestrained, and make them blatantly indestructible. If you want to strike fear into the hearts of others, play a faceless.
Warning: you might play off your mask as an eccentricity, but don't be surprised if you still don't make too many friends. Even avoiding it, your mask will make trouble for you. Stay vigilant.

Waterbearers are unique, controlling an abundance of water, or maybe it controls them. If anybody plays a waterbearer, the game’s going to have an immobile treasure that removes thirst. If you want to be the one who controls it, it better be you.
Warning: don’t be a waterbearer unless you want the responsibility. Or maybe just keep the water for yourself.

Quarantines have memories that slowly open new opportunities and possibilities. Your stasis facility can also give you power and independence. If you want to have a say in how the Apocalypse shaped this World, play a quarantine.
Warning: you're a fish out of water. Being from the Golden Age means you may be cornered by questions you can't, or won't want to, answer.

Child-things have really creepy but strong abilities, and a couple of fun moves that push what characters are capable of. Child-things also get, in the form of their den, a small measure of safety and security starting out. If you want everybody else to be a little spooked by you, play a child-thing.
Warning: the fucking wolves are coming!

The news runs a radio studio, with all that implies. They're more fun to play than a hocus and less powerful than a hardholder, but more dangerous to the status quo. Play a news if you want to change the world.
Warning: problems are going to find you. Running a radio studio means people will be listening.

The show is a vibrant and messy thrill seeker. Their music is potentially game-changing, but they're symbiotic, forever linked to another player's character. If you want to be the center of attention, play a show.
Warning: you always have a leash, and the holder reaps what you sow.
Posted by Patrick Mallah at Sunday, February 26, 2017 No comments: