how much does that castle cost? 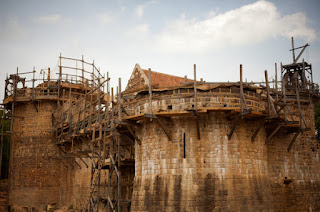 There is a fascinating project being undertaken in France where a group of archaeologists and engineers are building a medieval castle using only the tools and technology that would have been available to the builders of such a castle from the period. Even the workers are only allowed to wear period-appropriate clothing and eat at a local restaurant which opened to serve period-appropriate food. They started the project in 1997 and they're not sure when they'll be done, sometime in the 2020s. The castle employs 55 people who work year-round designing and building and maintaining the building and grounds. This castle is not that big and not grandiose by modern standards, but it is weirdly gratifying to see how progress has been made on the project year after year. There's also a wikipedia link that gives a decent summary of all of the available information.

Employing this to a tabletop game, depending on the game system, you could extrapolate the costs of building a castle from this information. Assuming silver as a standard unit of currency and occupying a healthy mix of professions into the construction of this castle, you can expect to spend about 20 silver every day or 600 silver every month. Over a 20-year period of time, that amounts to 144,000 silver pieces. If gold is your currency standard then you can increase that to 1.4 million silver. That's just to pay people to build the castle, that doesn't include building materials or tools or all of the hiccups that might occur along the way like labor disputes, foul weather, running out of materials, bandits, wandering monsters, war, or anything else that might delay or stop construction. The construction times listed in the 1st edition Dungeon Master's Guide are very forgiving. 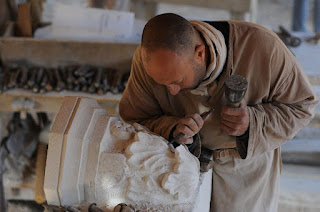 Using magic could speed up the process or make some aspects of construction easier, but there are few low-level spells with utilitarian aspects. The 2nd edition of AD&D gave gold piece costs for a wizard to cast a spell, but this was a list devised to part PCs from their gold and nothing more as some spells on the list had no material components whatsoever. A PC spellcaster should be able to speed up the construction of their own castle, or be able to assist a non-spellcasting PC in exchange for money, services, or a free room in the finished keep. As a sample spell from 2nd edition that would be useful for constructing a castle, Wall of Stone is a 6th-level permanent spell that only requires a small block of granite as a material component.

You could buy the Castle Guide and plot out exactly how much stone, how much gold, and how many workers with a very good basis of management and flexibility using a gold standard, but most of the people I play with find that attention to detail boring. If that's the case for you as well, then...

No castle is typical or average, each must be specially designed. The smallest of castles will take 15 years to build, larger castles might take upwards of 25 or even 50 years to build. Every year of uninterrupted construction costs 7200 silver pieces for labor, assuming stone is relatively easy to quarry and wood is readily available from a nearby forest or grove. An NPC wizard will need to be paid in order to help, but a PC wizard can be handwaved into assisting and dramatically reduce construction time. For each NPC wizard who assists with construction increase the cost by 50% and divide the construction time by their level (or combined levels); PC wizards simply divide the construction time by their level unless the players have negotiated a wage between their characters.

For example, Brienne's castle is huge and is likely going to take 35 years to build costing 252k silver. She has a 12th-level wizard assisting her so the total cost will end up being 378k silver but will only take 2.9 years. If another 10th-level wizard helps, the cost increases to 567k silver and will only take 1.6 years. 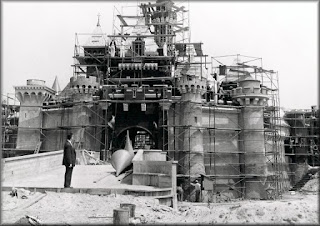 Posted by Patrick Mallah at Saturday, July 02, 2016 No comments: