I had the idea that since I'm looked up in my house now is probably the best time to sign up for InDesign and see if I can convert some of my Apocalypse World playbooks into InDesign. I gotta say, InDesign feels like a very slick and user-friendly interface for somebody who wants to work quickly and easily, but the obscurity of their terminology is absolutely frustrating. Every time I want to do something I have to google it, literally. The interface is so unintuitive that I spend several minutes scrolling through every option and still can't ever find what I'm looking for. 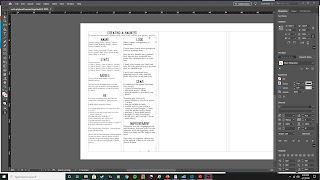 I just started building the second page of this pdf, and only just discovered (on accident) how to create wider margins for the columns. When I try to go back to the first page and adjust, it changes nothing. Which means I can do one of two things:
1) google several tutorials on how to adjust text, images, and preserving the layout since adjusting the margins doesn't automatically do all of that
2) just rebuild the first page with wider margins

2 sounds easier, but both are ridiculous options. Scribus, at least, just moves things around when you change the spacing of objects.

Everything about Adobe's monopoly on these sorts of tools is stupid, and I hate it. And now I'm part of the problem too. Cheers!
Posted by Patrick Mallah at Tuesday, April 07, 2020