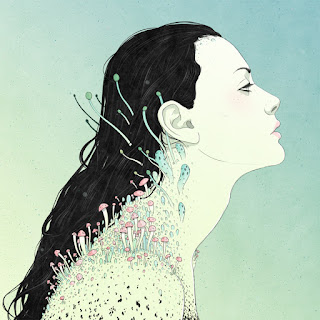 Humanoids with radiant fungus growing out of their skin. The fungus doesn't take a single appearance, it can form as a mossy fur, tiny mushroom caps protruding through hair and from ears, slime molds dripping from mouths and fingernails, polypores lining the chest and legs. Those infected eventually turn violent and insane, if they haven't already been subsumed by the fungus.

They will eat anything, and when they encounter living creatures attack fearlessly until their prey is dead. While fungal creeps usually don't attack with weapons, their limbs have become terribly strong and capable of tearing living beings apart. In fact, letting a fungal creep tear off an arm to snack on it might be an effective strategy to distracting one.

Fungal creeps don't attack one another, and if a fungal creep infects someone (see below) while fighting them it will stop to find a new target.

Fungal creeps act alone, but occasionally can be found resting in groups (1d6).

Armor: as Chain, fungal creeps that were wearing armor don't use it effectively but are still difficult to hurt

Attack: two 1d8 clubbing attacks, if both attacks hit the same opponent they will grab (no save, STR check to escape) their victim and start biting (1d6 automatic hit every round until freed) and the victim must save against the infection (at disadvantage, rolling twice and taking the worst result)

Defense: every attack that is scored against a fungal creep causes the attacker to roll a saving throw against the fungal infection (vs Breath or CON)

Infection: infected characters don't feel different right away but within one day start growing fungus of some kind on their skin or from their orifices, after one day of infection the character can regenerate 1 hit point / round, after two days the character starts regenerating 2 hp/round, and so on. Once the character is regenerating a number of hit points equal to their hit dice, their brain has "died" to the fungus and they become a Fungal Creep. The infection is neither a disease or a curse and nothing short of a Restoration of the body will remove the fungus. However, a simple Blessing will prevent the fungus from growing stronger for one day.