When newborn daughters are thrown into rivers, the grim necessity of a desperate family to rid of itself of another mouth to feed, they sometimes rise again as the whispering undead. These creatures become one with the waters of the river, seeing and hearing everything along the ripples of water. They will whisper sweetly along the riverbanks, hoping to draw the curious out to them. Legend says that any who draw near a river banshee are stricken with deep sadness, and their voices will become paler and softer until they can only whisper out their words. In truth, a river banshee collects secrets and often places slivers of these secrets into a victim's head, literally. Someone who has succumbed to a river banshee's whispering will have a razor thin line of flesh that is scored or scarred. Anyone living with a river banshee's secrets in their head will slowly start to die, their sadness will slowly overtake everything they do until they collapse and refuse to move, or simply never rise out of bed in the morning. Only magical intercession can remove the secrets in one's head, for the secrets must be drawn out of the victim's head through placation and inducement. 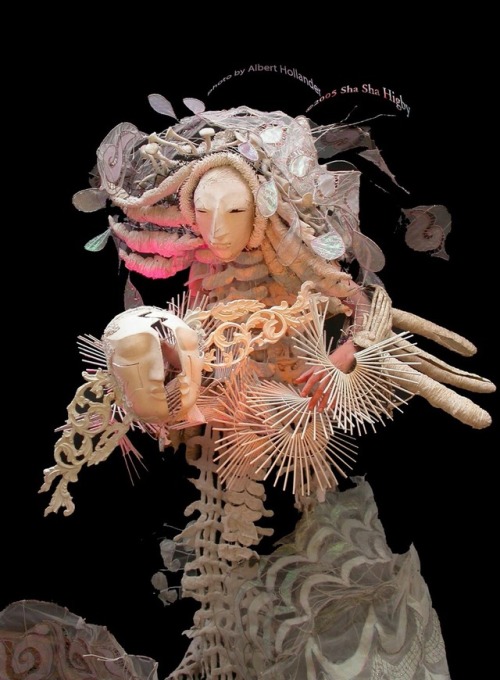 A river banshee literally opens its victim's skull and whispers the secrets into their brain. Being interrupted in this task can mean the victim will be instantly killed. The safest time to approach a river banshee is while it is trying to lure a victim to the river it resides in.

A river banshee is frail with malleable bones that protrude from skin mottled and thin like lace. If one is near, the whispering sounds like a young girl's voice, eager to share her knowledge with a wily accomplice. If it is tricked into revealing itself it rarely fights and always flees when outnumbered. Lights and loud noises can also prevent a river banshee from appearing.

HD 1
Defense as hide
Attack +4 or DR 13
Ribcage grapple 1d6
Save vs Petrification or Wisdom, to avoid the lull of their whispers
Morale 5
Posted by Patrick Mallah at Thursday, April 02, 2020

Email ThisBlogThis!Share to TwitterShare to FacebookShare to Pinterest
Labels: monsters