"really, are you sure you want to do that?!"

...is something I found myself asking repeatedly during the last session. 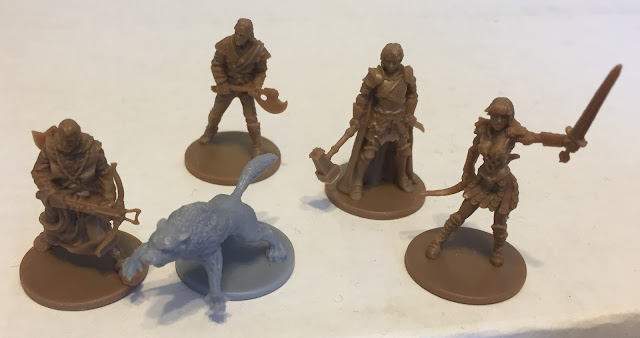 They got ambushed by goblins, and during the fight Ooplar got trapped down a ravine. Big Bertha and Sir Richard spent their time performing trick shots to pick off the goblins while Edgar stuck to healing his comrades.

Ooplar explored the goblins' home, which was very obviously a former wizard's underground lab, while Big Bertha interrogated and tortured the last living goblin above ground. They pretty much ditched the place when they found the last remnants of that wizard's experiments. Edgar cast Speak With Dead quite a bit, so maybe I should keep littering areas with corpses - he discovered a teenager who had been murdered by his "friends" but the whole group collectively sighed and moved on to the caves.

They re-entered the caves where they rescued Mariya from and explored further, finding a library and a tomb - both of which I ripped off from Servants of the Cinder Queen but repurposed as a Rjurik paladin who served Cuiraecen. They BURNED DOWN THE LIBRARY after reading one book and waking the Stone Guardian. Then they plundered the Tomb without heeding any warnings.

We left off with them hearing screams of dying men and the howls of dogs coming from the corridors outside of the tomb...

As a GM: I kept the goblins simple and didn't make their attacks particularly threatening. I could have made the first scenario a lot more deadly but in the moment I felt like that would have been cruel. Even the surviving goblins in the underground lab acted defensively and never engaged the PCs. I won't hold back next time.
When they burned the library, they ended up missing out on some magic scrolls, a magic item, several maps, a secret passage, and several books that explain what's important around here. Kind of amusing since I know one of them has read my advice for playing.
I think the next session will have to serve as some kind of finale. Either they will have to definitively stop the Termaxian wizards, stop the Tiamat cultists, or they'll all have to die in the attempt. They also managed to piss off Cuiraecen, the deity who is most influential in this region, that will definitely have come up in the next session!