it's not *technically* D&D

I was asked if I would DM a game of Dungeons & Dragons for a group of friends (who're also standup comics), many of whom had never played before, and I agreed, but wavered on which rule set to use for awhile. I told them I was thinking of running Swords & Wizardry and a few of them revealed that they didn't like the talk about math and probability that I was launching into. I hadn't really prepped for a role-playing game in months, almost a year, so I started looking at all of my possibilities. I wanted to make everything simple so we could just get set up and start playing right away with little explaining of rules and a minimal list of choices.

I had almost given up and just said to myself "Fuck it! I'll just run 5th edition, complexities and all!" but my urge to play a system I enjoy won out... Dungeon World is a D&D-shaped hack of Apocalypse World, and Freebooters on the Frontier (FotF) is an OSR hack of Dungeon World, so... I'm running Freebooters for them! Using slightly modified versions of Maezer's character sheets, I've been running a game for about a month now.

Ooplar Junior is the Fighter
Edgar "IT'S JUST A LAST NAME!" Childbanger is the Cleric
Big Bertha is the Thief
Sir Richard Fitzwell III is the Ranger

During character creation I made use of Dyson's Totally Not A D&D Fiasco to tie all of the characters together. This worked really well, and everybody enjoyed it! - even as the choices became more limited.

Ooplar Junior fought in the militia with Sir Richard Fitzwell III
Sir Dick was in an assassin cult with Big Bertha
Big Bertha and Edgar Childbanger both carry a curse they acquired from an angry witch they robbed
and finally, Edgar shares a home with Ooplar

Then to start them off I read this:


The war in the south is threatening to spread northward. The duchy to the east has begun to grumble about past grievances, and the regent needs all of her most trusted advisers and scholars to counsel her in these troubling times.

You are not one of them.

Mariya Saisset is a sage that the Queen wants to consult with and, due to a personal connection you have with her, Count Oliver has commissioned you to venture north to Silverhead Keep to track her down. She traveled to the northernmost province some months ago and hasn't been heard from since. A message sent to Silverhead Keep has not been replied to and the worst is now feared.

You have been tasked with finding the sage, Mariya Saisset, and returning with her to Castle Haestead in the capital city, to an audience with the Queen. If Mariya has perished then her remains should be secured and brought back to the castle. You are being gifted a small retainer of silver coins and a riding horse to accommodate your travels, and will receive 100 gold coins from the Queen's coffers upon a successful return to Castle Haesrien.

Then I let the players draw randomly from a set of cards I had written with random backgrounds of how their characters knew Mariya, with little bonuses for them once they found her.


With minimal prep and a short setup, we had a standard "go rescue this NPC from danger" kind of quest. Over the last three sessions, the players made their way to Silverhead Keep, got a venereal disease from a prostitute, got cured by a friendly elf sorceror, broke into an undead elven tomb (and then ran away with an artifact!), explored a nearby cave, stumbled upon cultists prepared to sacrifice Mariya and her two assistants, almost drowned in a flash flood, got into a fight with guards at the Keep, ran into members of Big Bertha's cult, and are about to be ambushed by goblins.

I'm not running an adventure, per se, but I'm using the castle from Keep on the Borderlands, a nearby mountain with a dungeon and Termaxian wizards from Dwimmermount, and Tiamat cultists from Zak Sabbath's blog pretty much following what would be a prequel to Hoard of the Dragon Queen, and all of this is set within my own version of the Birthright campaign setting!

Right now they're keen on destroying those pesky Termaxian wizards but, as I said, they're about to be ambushed by goblins! 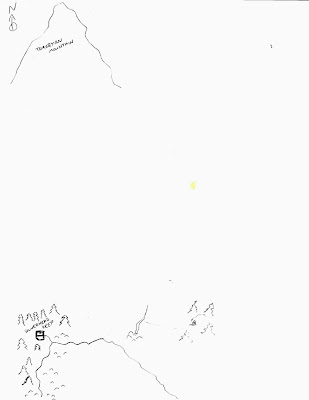