Kamutra was once an ancient dragon, obsessed with extending his own life he explored every possible avenue to fins the secret to immortality. He imprisoned his own kind and discovered ways of inflicting magics and curses, documenting the effects they had. Kamutra pursued the only method he knew to extend his own life, by consuming the blood of his fellow dragons, though this had despoiled his body and he found himself growing more despondent with each passing year. 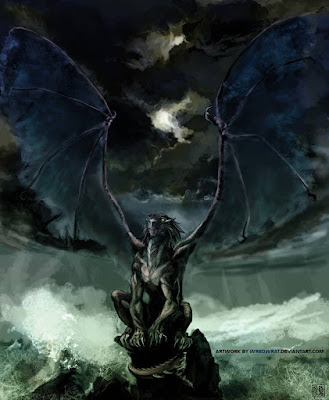 Kamutra was fortunate to cross paths with and befriend Sanglorious'es child, Aspehnen, and they discovered the two shared a connection within dreams, able to converse whenever both were asleep. With the help of Aspehnen and her brother Verlamm, Kamutra developed advanced magics and skills within dreams, researching a way to transpose his physical form into dreams in order to become truly immortal. There was only one catch: in order to live forever Kamutra would have to ensure that there were always dreamers.

After toiling for an age, Kamutra finally achieved his goal of immortality through the creation of dreamwalkers. However, the transposition did not come without a price. As the dragon retreated into dreams, his desires and passion became muted and insubstantial, his mind became as mercurial and unfocused as a dream. Kamutra would probably have tried to escape, but he had so committed himself to traversing dreams that in the end he became one. Eternally trapped within dreams, Kamutra flew far and wide across dreams to teach the art of dreamwalking to any who might dream deeply enough to catch his attention.

Dream Magic
Spells must be selected when the character first enters sleep. The maximum number of spells active is equal to the Dreamwalker's charisma modifier (minimum of 1). Spells have effects upon waking the next morning.

Dreamlink
connect to others through dreams
Effect: The Dreamwalker can link to a number of PCs and NPCs dreams equal to their level, these connections must be made with people the Dreamwalker has at least met face to face. While awake, the Dreamwalker can recall knowledge of or have communicated with the PC or NPC. This knowledge can be used to receive bonuses for skill checks, or supplant the character's knowledge with information they might not have access to in the waking world. For example, linking to a priest from a secluded monastery might bestow knowledge of the layout inside the monastery.

Reveried
acquire skill in waking world from dreams
Effect: The Dreamwalker can learn a skill, at the maximum for their level, for use in the waking world. The knowledge of this skill is lost upon entering sleep again, unless the Dreamwalker continues to use this spell to acquire the same skill.

Umbral Ally
summons dream ally into waking world
Effect: Upon waking, the Dreamwalker has a shadowy ally that follows them obediently and without question or hesitation. The ally has half the HP of the Dreamwalker (round down), but otherwise has the same stats for combat purposes. The ally disappears if their HP are reduced to zero or when the Dreamwalker sleeps again.

Email ThisBlogThis!Share to TwitterShare to FacebookShare to Pinterest
Labels: Kosranon