The players in this game are all women. I feel like I should point that out before I mention that the first thing they did in the second session is seduce the last surviving pirate into having a lesbian orgy with them. It feels like not a lot happened in this session, but there WAS quite a bit of character development. Its difficult to remember in-game conversations, but they definitely spent a lot of time discussing what they wanted to do and what their goals are. My players also don't have a lot of experience with rules so I'm sort of keeping the nuts and bolts rules secret but just offering a lot of options and trying to make "Yes, you can (do that) if you (do this) first" statements. I'm essentially using an Apocalypse World 'success/partial success/miss' kind of roll for everything, but the players always roll a d20.

They had dumped the bodies of the dead pirates into the water of the cove, and the blood attracted some salamanders - Fuegonauts. The salamanders attempted to capture them, but the magic-user in the group, Diera Fireflame, cast a spell called Song of the Poisonous Memory. Diera Fireflame has been having bad luck with her magic, she keeps failing to cast a spell and the magic twists and warps into ways she doesn't intend. So far she has inadvertently and unintentionally possessed a magic club, sent a charm spell backwards in time to convince a hive of bees that she's their queen, turned her eyes into black inky portals to the Abyss (she can still see with them), turned all insects within 100 feet into geniuses, and that's just what I can remember. She finally cast a spell successfully, and infected the salamander brains with brain aneurysms, causing them all to die instantly. Later, she would do the same to a swarm of giant centipedes.

They spent a few days resting, brewing poison, identifying magic items, and converting the pirate cove into a base of operations, then sailed around the southern tip of the island in search of elven ruins. Their surly and rude warrior, Zora Lieng, had come to the island in search of elven relics and their new ex-pirate lover indicated that ancient elven ruins could be found in that direction. After landing on a centipede-infested beach, they made camp and explored for a few hours, finding a grove of trees with massive beehives. Zora has decided to destroy the trees, but it's getting late and so they returned to camp. 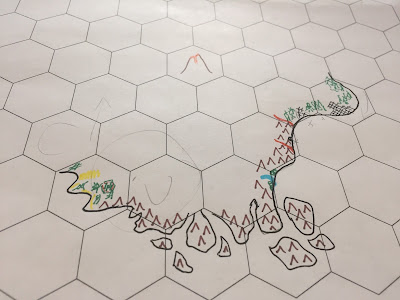 1st-level spell
Song of the Poisonous Memory
range: 30 feet
Wisdom saving throw negates
failure = target takes 2d6 damage, damage ignores armor and cannot be reduced in any way, only affects creatures with brains
1st-level spell, cast at higher level to affect more targets (each level adds +1 target)
if rolling for spell, a critical success turns the spell into an area effect (a DCC spell might also increase damage or be able to affect non-brained creatures with a high enough roll!)