Zaos might have been the first god, nobody is sure if the brittle parchments etched with the name are true accounts of a divine being or if they were forgeries meant to mislead seekers into misadventure and folly. Nobody is even sure if Zaos is male or female. Dragons call Zaos the first primordial serpent, elves refuse to utter his name for fear of drawing his attention, and dwarves laugh that Zaos is a clever myth designed to reveal the treachery of magic. The truth is Zaos is a god of time and space, it doesn't matter if Zaos was here first because he/she/they are everywhere.

Zaos has plans and plots that extend beyond anything the PCs could even imagine. Trying to fight Zaos is pointless, because anything you know about him is what he wants you to know. If you're fighting him, it's because he wants you to fight him, it's part of his plan. He might offer you a deal to give you something you want, but most of the time he's watching and waiting. He does this with mimics. 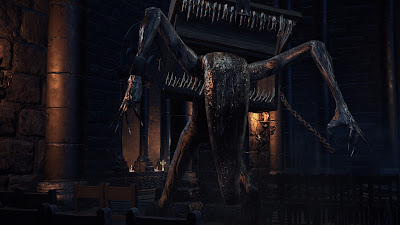 What are mimics:
1) Mimics are his loyal servants. All mimics worship Zaos as their god, for he did create them. If they fulfill their duties, they believe Zaos will embrace them into the folds of time and space in which Zaos lives.
2) Zaos is all mimics, they are physical manifestations of his divine self. Wherever a mimic appears, it is part of Zaos'es sensory apparatus into the plane of reality.
3) Mimics are akin to golems, designed and constructed for a specific purpose. Zaos, in his madness, has made so many mimics for so many contradictory reasons that he has often forgotten what a mimic was for. The ones in our world are the ones he has forgotten about and left behind.
4) Every mimic is a time machine, acting as a bridge between one specific time and place to another, it only requires the right key or password to activate and recognize a servant of Zaos.

What does Zaos want today:
1) Knowledge, and also to keep it away from some people. Mimics will appear around wizards and schools of magic. Most of the time they only spy on the arcane arts, but any wizard who attempts to study time or manipulate it through magic will be drawing a target on their own back. Only Zaos can know the secrets of time travel!
2) He's a teacher, fond of challenging his unwilling students. Mimics will appear to test the PCs' ability to find them, the mimics will ambush the PCs when they can. Mimics who are spotted will feign surprise when spotted and try to flee. Lone PCs will find themselves in one-on-one duels with mimics. They never kill, but if the PC is defeated the mimic will leave a note on their unconscious body, written in one of the oldest languages, and all it says is "get good."
3) Even he's forgotten. In his struggle to remember he gets bored and distracted easily. He wants to see how far he can push these adventurers around, every chest and container they encounter will be a mimic. Every time a mimic manifests it will giggle and laugh maniacally. Mimics will keep appearing until somebody dies from one, then the final mimic gets sad and weeps before it dies of its own accord. Mimics will never appear for these characters ever again.
4) Endless and perpetual war. He hates the living, for he was the first god and everything that came after is an affront to his existence. He wants to destroy everything and everyone. He's using mimics to try to replace everything in the world, and these damn adventurers and spelunkers keep finding his first experiments. He's going to start branching out, mimic ladders and mimic doors and mimic chairs. Soon after that it will be mimic carriages and mimic fences and mimic chandeliers. He wants the living to fear the world they live in. Once he has perfected mimicry of objects, he'll move onto mimicking animals and then people. The more paranoid he can make the living, the better.


inspired by a combination of playing too much of Dark Souls and reading Michael Raston's glorious post about mimics
Posted by Patrick Mallah at Monday, April 08, 2019

Email ThisBlogThis!Share to TwitterShare to FacebookShare to Pinterest
Labels: monsters