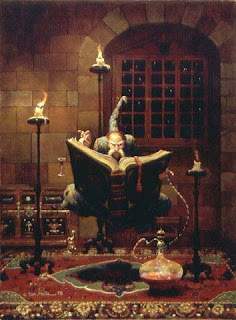 When a wizard wants to learn a new spell, they must first find the spell they want to learn, then spend several hours studying the arcane formula.

The level of a spell is the number of hours a wizard must spend in secluded study with the formula, and this level also represents how difficult it is to learn. At the end of their study, the wizard rolls 2d6 and adds their HD and INT modifier to the roll. If the result is 10 plus the level of the spell or higher, they learn the spell. If they fail to learn the spell, they can try again after leveling up.


This was something I looked forward to and simultaneously dreaded when I played wizards in 2nd edition AD&D: rolling to learn new spells. In this system, higher level spells are more difficult to learn, but accomplished wizards learn lower spells more easily. I like the idea that wizards have to study to learn their spells, even if I don't like the Vancian style of daily studying.
Posted by Patrick Mallah at Tuesday, April 16, 2019