I decided to pick up Dark Souls again. "I own it," I thought, "I should probably try playing it again." But I kept putting it off, some other game was always ready to be played. Recently, somebody told me that Dark Souls was easy, and when I asked him to explain he said "The secret to winning Dark Souls is knowing where to dodge, not when."

I remember struggling to beat the first boss, the Asylum Demon, and getting killed repeatedly, losing souls, frustratedly running through the same monsters trying to get to a boss fight I felt was barely winnable. Then I popped the disc into my Playstation, made a new character, coasted through every corridor with barely a scratch and defeated the Asylum Demon on my second attempt. Suddenly, armed with this newfound wisdom, I was charging through Dark Souls like a superhero dropped into a room full of mooks.

I still make mistakes, I still get killed a lot, and I still don't really understand what all the numbers and words mean on my "character sheet" 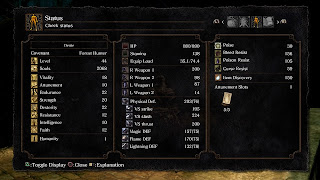 clicken to embiggen
but I'm no longer finding the game tedious or boring. It's a genuine joy to play!

I still haven't gotten very far, I think. The Chosen Undead is tasked with ringing the two Bells of Awakening during the first act, and I've only rung one. But yesterday, I defeated the Gaping Dragon on my second encounter with it, and I wasn't even using the best weapon I had against him.


not my video!
this guy has better equipment than me