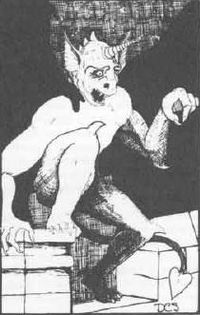 This one time, during D&D, the players were trying to strategically retreat from the dungeon and they had to go through a series of rooms where gargoyles were guarding the passageway and preventing anything from moving through them. The gargoyles ambushed the characters and the lead fighter engaged them head-on. After about 3 rounds, I realized that the only way the gargoyles could hit the fighter was if they rolled a 20, which made the battle quite lopsided. Because we were playing 5th edition D&D, there were no specific rules for pulling unique tactics and the whole fight just turned into a slog. Featureless hallway, an enemy that refuses to retreat, players who insist on killing their adversaries however boring the process. A perfect cocktail for traipsing through a swamp of dice rolling. I figured out that it would take about 16 rounds, on average, for the fighter to work his way through the gargoyles and then just rolled 32d20 for the gargoyles to see if they would ever get a hit in. On average, they should score at least once, but they didn't roll a 20 at all and so I simply said "it takes you a few minutes, but eventually you defeat the gargoyles and continue onward."

This was the point where I felt that combat should be taking up less of the game, and XP should not be coming from combat at all.

I've run into this problem a few times in previous games as well. The players just get up to a certain level and low-level challenges become boring and tedious because the enemy simply cannot hurt the characters. There is always a way to make these fights interesting or challenging, but when you're running a module your available palette of colours is quite limited. For example, I could have replaced the gargoyles with something else, but the gargoyles were part of a faction and their existence was predetermined by certain story elements from the module I was running. Changing what the gargoyles were would have changed other elements from the module that I wasn't prepared for, and in the moment I found a different solution. In retrospect, I could have just moved the gargoyles to somewhere else in the dungeon that was more interesting, where the fighter wouldn't be able to box them in and their attacks could be more meaningful.

When faced with a truly one-sided battle with enemies who are not a serious threat I've tried to think of other ways I might dispense with drawn out fight scenes and try to sum up the challenge with a single roll, or a simpler solution. The word "goons" could really be defined by anything that the PCs encounter that they are also willing to kill: low-level bandits, gargoyles, orcs, kobolds, goblins, possessed children, city guards, tax collectors, etc.

POWERED BY THE APOCALYPSE METHOD
Roll 1d20 and add your attack bonus. On 20+, choose 2. On 11-19, choose 1.
• you kill all of them
• you don't get hit
• you don't get slowed down by them
On a miss, you don't kill any of them, you get hit, and you are most definitely inconvenienced by them.