principles
Some rules allow you to attempt to bribe NPCs and one of the things I've always taken for granted with bribery is that it is not just a matter of how adroitly a character offers a bribe but also whether or not the NPC accepts the bribe. Trying to bribe a paladin to let your criminal character go loose when you're in the wilderness far from a civilized township might be difficult, but is still a lot easier there then bribing that same paladin when you're on a major street in the capital city of his Theological empire. Some people have principles, after all, and try to live by them even when they know they could break their own internal code.

In Andy Kaufman Revealed, Bob Zmuda tells a story of how a script doctor he worked for bribed the staff at a bakery to give him all of their clothes. Every employee, except for one, had stripped down to their underwear, and this script doctor kept offering more and more money for this older woman's clothes but she adamantly refused. He was offering her ten grand, and she kept shaking her head, tears streaming down her face, while her co-workers egged her on "Take the money Helen!" Some people have principle, and even if they want to take your bribe, they simply won't.

how much?
I dislike bribery in Apocalypse World because it's too easy. If you've got 1 Barter you simply offer to it an NPC for something and they do it, or they give you what you want. That's boring. Failure is always more interesting. Principles can take a back seat to greed, and with a system like Apocalypse World the barter involved is so loosely defined that it doesn't seem like it should always work. If the barter were clean water then maybe that would work all the time but if you've established in your game that barter is comprised of pristine dildos then offering one in exchange for everything makes little to no sense.

I've worked in a hotel as a night auditor for eight years now, and there's this thing that drunk people do where they're looking for food and I'm telling them what pizza places deliver to the hotel at 3 in the morning and they'll hand me the menu I've shown them and say "You order it for me." Imagine a drunk man, he's always white, pushing a menu at you and with an annoyed drawl bordering on belligerence commanding, not asking, you to "Order me a pizza." Fuck you drunky! Order it your goddamn self. I did this for a guest once, and it was such a convoluted game of getting information from the guest and the pizza employee, and relaying it to both of them back and forth that I will never do it ever again. Unless that drunky pays me first.

The size of the bribe is also important. Two gold might convince a guard to look the other way, but two copper is likely to make him clobber you upside the head before you have a chance to increase your offer. How much is a copper worth though? Because if it buys his food for the day, maybe its enough. Most people could probably be bought quite easily, these same people probably work jobs they don't really like in order to take money home to pay bills or buy things they want. Nobody ever really wants to be as a garbage collector, but garbage collectors can potentially make a lot of money and it unskilled labor. Garbage collectors in Long Island can make six figure salaries. I bet you're thinking about becoming a garbage collector now. Shit, I'd do it for less than that! But some people, you couldn't pay them a million dollars to pick up other peoples' trash.

the thin green line
There's a fine line between greed and principles. As a GM, you can ask yourself how much a particular NPC could be bought for, and ask yourself honestly: are they willing to accept the bribe offered? If you can't decide, that's what a roll is for. If the roll is purely one of character skill, apply it like a Charisma check. If the roll is a narrative choice, then success could give the PC a new NPC contact or open up a new story. But just throwing money at an NPC shouldn't get them to accept a bribe. Failure is a very real part of bribery that makes the whole exchange interesting.

I'm not a thief, but technically I have stolen from an employer by allowing a customer to steal. I worked at a shitty clothing store more than two decades ago and we kept tip jars next to our registers. Working for minimum wage was pretty bad and the tip jar usually paid for lunch, or sometimes a night out drinking. I had a couple come through my register and they were buying more than $100 worth of clothes and as the man pulled out his wallet, thumbing through his cash, I said "If you put a 20 in my tip jar I won't charge you for these two items" pointing at two things that were essentially half of what they were buying. They looked at one another, shrugged. There was a moment where he paused, like he was weighing his options. It occurred to me in that moment that he could just take the items and threaten to report me to my boss if I objected. Perhaps he was considering his own level of risk in simply taking the clothes without putting money into my tip jar. Then he put a 20 in my tip jar. A bribe. Or did I bribe them? 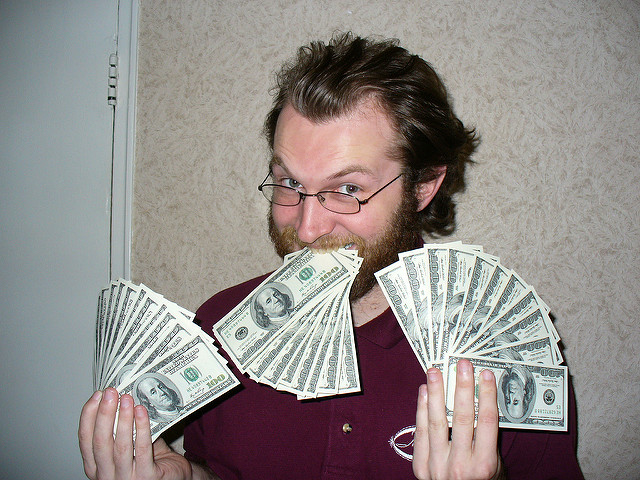 failure
This is the part that I find most interesting. In Bob Zmuda's book, the woman can't be bribed into taking her clothes off, it doesn't matter how much money she's offered. When the drunk guys try to get me to order their pizza, I refuse citing my own personal liability for handling their credit card. If nobody were willing to be paid to pick up trash we would live in a very messy world. And if that man in the clothing store had simply taken the clothes what can of worms would have been opened? That last scenario could have played out in so many ways because we both essentially wanted something from the other person, free clothes versus 20 bucks. Have you noticed that the last scenario described is really the only one where the bribe worked?

Bribery is very close to begging, and begging doesn't always work, but we have systems for that too.
Posted by Patrick Mallah at Tuesday, May 17, 2016