"You realize I could kill all of them right now?"
[5e Dwimmermount]

Missing another player this week, the beginning of our Dwimmermount session started with a diversion in order to justify one character's absence and another character's return.

The party heard a bellowing roar echoing from the hall and chamber behind them, and Ilona went rushing back down the way they had come to find the source of the noise. They found Poach surrounded by four squat frog-like men with spears. Poach was bruised and wounded but seemed to be holding his own. The party engaged the frogmen and cut them down rapidly. Poach led them to another room where they found Levity tied up in front of a hideous statue of a frog creature carved out of charred wood. Tsetsig destroyed the statue while Levity explained he had been exploring, looking for one of those mimics, and was captured (again) by the frogmen, the Ranine. Braak mentioned to Horatius that he thought he saw one of the mimics in another room closer to the stairs and the two of them split off from the group to find the mimic. Poach followed.

Levity led the group through the corridors back to where he had been captured and they found a group of a dozen ranine. Sulla cast a fireball into the center of the group of the frogmen and every single one of them died instantly. From another room, a ranine peered out and surveyed the carnage, he was wearing copper loops around his wrists and ankles and rings jangled from piercings in his lips and nipples. He immediately retreated and the party followed, quickly killing or cowing the other ranine with this cultist.

Rather than wait for them to search rooms, I just had the lead ranine cultist on this level poke his head out of a door and lead them straight to him. I was surprised at how easily Sulla's fireball took out the entire group of them and was expecting them to just slaughter the rest of these guys. I used bullywug stats for the ranine, but I gave them a shrink ability and the cultists can cast some spells (obviously).

They interrogated him and asked him what his people were doing in Dwimmermount. He only spoke Bestial so Sulla questioned him and translated for Ilona. He explained that his people came from a place called the Deep Hollow and they were chased out by giant lizards, they searched upward for a place to breed and many of their people were killed by the Dead Ones but they escaped when they found the Water Ways. The Water Ways led them to this area and they have been fighting "the Black Men" since they arrived (Klayqus and his people, the Thorgrim).

There's not a lot of explanation for why the ranine are on these levels. The book says they come from the Deep Hollows level but they clearly didn't traverse the hallways to get all the way up to this area. I used my best judgment while the players were interrogating them, and gave scant details about the Ossuaries, then in a moment of inspiration decided to give the ranine malleable bones and the ability to shrink their bodies and squeeze through tight spaces. The "Water Ways" was born. None of the players have questioned any of the ranine further about the Water Ways, but if they do this will essentially be the water pipe travel method that is detailed in the introduction.

They tried to negotiate a treaty with this ranine and he spoke of their high priest, Groak, who resided one level lower. "If he's down there, then why are you up here?" "Me told you-wor already, we need more room-wor." "Take us to him, now." and that was that. This ranine cultist, Mona, led them through a few halls and rooms, down stairs, past two groups of other ranine. They were stopped once by another cultist, Bem, who insisted on going with them to find Groak.

Mona and Bem led the party to the cistern in the Hall of Lesser Secrets (level 4, room 30) and Groak was not there, but they did see about two to three dozen other Ranine within the cistern. Another cultist, Gax, stepped forward and challenged Mona and Bem in the Bestial language, saying these creatures don't need to negotiate with Groak because he would just order their death. Levity could understand Bestial and remarked "We are very outnumbered down here." and Sulla replied "You realize I could kill all of them right now? One fireball in the center of this room would do the trick." and since Mona could partially speak Common he stepped toward the door, trying to stay behind Sulla, and spoke in Beastial to Gax "These creatures can understand everything you say." Gax relented and explained that Groak had gone to inspect the trapped corridor, and led them to the western double doors that led to the teleportation trap on this level. 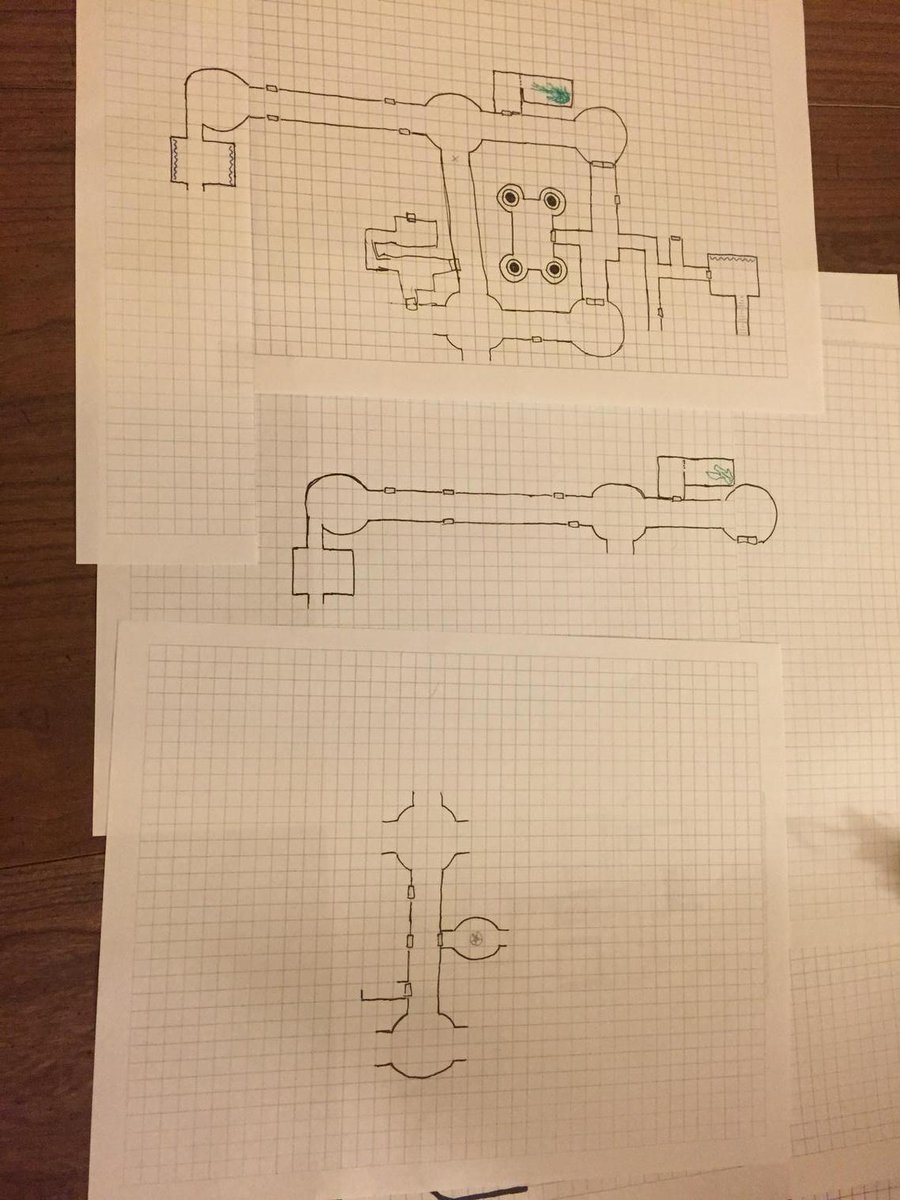 The party experimented with the teleportation trap, accidentally getting split up. Ilona got lost into darkness with Sulla. Tsetsig heard and saw a group of minotaurs fighting ratkin, and judging them to be inferior beasts decided to quietly slip away and ignore them. Levity found a jail cell. Their efforts meant they collectively were learning that each circular area acted as a teleportation pad, and that the destination was random.

You can see the fruits of their efforts on the right, you can also see how I fucked up one of the maps

When I first read Dwimmermount, the wererats were the only faction I could imagine being allied with the players because their goal was simple and didn't confront other characters on any level: to escape. I didn't like the lycanthropy aspect of the faction and that's when I wrote up my ratkin race for 5th edition.

Tsetsig, being teleported again, found a series of doors and decided to start opening them, one led to webs and he closed that one, and Ilona caught up with him by the time he opened a second door and saw a statue of Turms Termax. Tsetsig stepped forward to smash the statue, but the statue came to life and smashed him, nearly killing him in one blow.

I'm using stone golem stats (minus the Slow ability) for all of the animated statues.

Hearing the sounds of battle echo in the corridors, the other characters began to frantically jump through teleporting pads. Levity found his way to the fight with the animated statue while Sulla got teleported near the fight between the ratkin and minotaurs. Seeing two ratkin dead and one survivor surrounded by four minotaurs, he lobbed his fireball at the minotaurs and managed to kill three of them. The ratkin ran to Sulla's side and the remaining minotaur charged with his battle axe and struck Sulla down with one blow.

Sulla spent the rest of the fight rolling death saving throws, but the last ratkin pulled him back down the corridor and they both got teleported. Sulla ended up next to the first ratkin he met, Nirkz, and the second ratkin, Puzz, found the fight with the stone statue. The minotaur chased after them both and found the ranine!

The fight with the stone statue was long, and if Levity hadn't been there to heal Ilona she might have fallen to the stone statue's fists. Battered and beaten the party retreated along the corridor and ran through teleportation traps until they were all in the same corridor. They debated trying to rest in the hallway but Tsetsig opened a door, hoping this would be an empty room that they could possibly rest in, and found the armory and weapon storage.

The party didn't bother to bar the doors but simply began to rest quietly with Nirkz and Puzz, the ratkin, keeping watch for them, and that's where we ended the session.

We played far enough along to get to the end of the rest - in truth, I wanted to see if there would be a random encounter (there wasn't) and everybody wanted to learn my new resting rules. Tsetsig and Sulla both wanted to identify the magical suits of armor in the armory and that took an hour, the remainder of their rest took 5 hours. Horatius might have found them and rejoined the party by then, but we won't really know until next Sunday.
Posted by Patrick Mallah at Wednesday, July 08, 2015