goblins are a nematodal disease 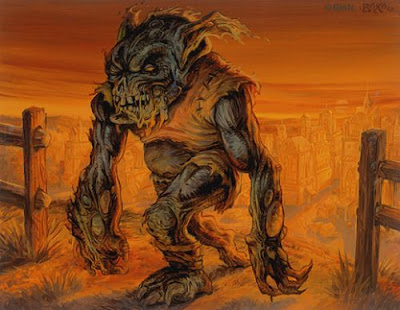 Goblins don't fear death because they have a very peculiar form of immortality: As long as a dead goblin is eaten by another goblin, all its memories will be passed on to that goblin - including any memories from previous consumed goblins! And since goblins are voracious cannibals, most goblins remember dozens or even hundreds of lives (and deaths), and see it as little more than an inconvenience. Goblins are not cowardly, they are gleefully suicidal with absolutely no concept of self-preservation or survival instinct.

Goblins throw themselves at opponents in giggling hordes no matter how many get slaughtered, knowing that only a single brethren needs to survive to 'resurrect' their accompanying horde. Goblins have little sense of individuality, believing themselves to be fragments of one mind, cursed to grow and splinter into many selves for all eternity.

Goblins don't reproduce like any other animal. As they age, they grow bulbous sores on their body and eventually their skin molts off and this 'skin' grows like a fungus, clinging to tree trunks or along cavern walls. It thrives in darkness, but this 'skin' will flourish in virtually any environment with moisture. It grows larger and eventually bursts open, shedding one to two dozen baby goblins that are virtually identical to the one who molted them in the first place. Goblins never eat this shed skin.

Goblin bites can get infected very easily. Anyone suffering from a goblin bite is likely to have skin that slowly turns gray or sickly green. After a few weeks, they may begin to forget who they were and start behaving like a goblin. After three months they will have completely transformed into a goblin, with no memories of their previous self, and no memories from the goblin who bit them either. Nothing short of magic can reverse this infection once it has taken hold.

Goblins frequently try to force their own blood and flesh into the mouths of victims because ingesting goblin flesh will turn a humanoid creature into a hobgoblin. This transformation is similar to when a person transforms into a goblin, but it's much quicker taking only a month for a complete transition. A goblin who eats a hobgoblin not only gains the memories of that hobgoblin, but will begin to grow into a hobgoblin with the personality and memories of the hobgoblin; this process also takes about a month. Hobgoblins will always keep some goblins around, despite their obvious contempt for their inferior cousins - when a hobgoblin dies, assuming it's a hobgoblin the others still want around, they'll go grab the nearest goblin and feed the corpse to it.

However, one hobgoblin eating another is a severe taboo, because of the result - a bugbear, a monstrously huge goblin that hunts and eats other goblins and hobgoblins. A humanoid creature that consumes the flesh of a hobgoblin will also turn into a bugbear, this process takes about three months. Bugbears tend to be solitary and avoid each other, even goblins and hobgoblins don't want them around.

A bugbear who eats another bugbear will turn into a troll. Trolls will consume anything and everything, but no further mutations are possible. 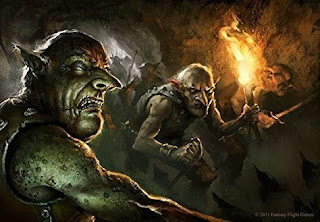 - - -
The concept of goblins as nematodes was originally created by Sam Anderson. I just expanded it a little.
Posted by Patrick Mallah at Saturday, February 08, 2020