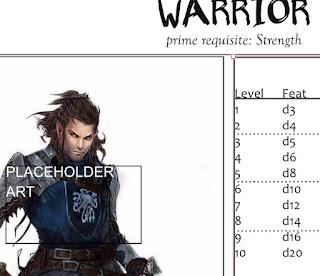 Warriors don't have an Attack score, instead Warriors have a Feat die. The Feat die is an extra dice that is rolled when a warrior attacks, the result of the Feat die is added to the Warrior's attack roll, in this way the Feat die is a rollable Attack score. The number of sides on the Feat die increases as the warrior levels up.
Prior to any attack roll, a warrior can declare a Feat. This Feat is a dramatic combat maneuver within the scope of the current fight. The Feat does not increase damage but can have some narrative or strategic effect. For example, a warrior may try to disarm an enemy with his next attack, trip an opponent, slide down a bannister and crash his shield into three opponents at the bottom, temporarily blind an opponent, and so on.
The warrior’s Feat die determines the success of such a maneuver. If the Feat die is a 3 or higher, and the attack hits, the Feat succeeds. If the Feat die is a 2 or less, or the overall attack fails, the Feat fails as well. It is possible for an attack to hit but the Feat fails, in this case the warrior still inflicts damage for a successful attack.
The Feat die does not increase in size beyond 10th level, and never receives Advantage or Disadvantage.

This mechanic originated as the Mighty Deed Die from Dungeon Crawl Classics. I really love the simplicity of giving fighters the ability to use special combat maneuvers without having to fiddle with a list of feats. I always despised that characters might have to specialize to disarm somebody, and then might never get the opportunity to disarm someone. Being able to execute a maneuver in the heat of the moment is so much more heroic. And fun!
Posted by Patrick Mallah at Wednesday, March 06, 2019