Megadungeon to rule them all

I don't think that I really like megadungeons. Not as written, that is. I think most are designed too cleanly, in one way or another, and a megadungeon should be messy and wild.

Stonehell is a wonderful concept, but many of the areas feel too lived in for what is supposed to be living in its halls. Plus each map is too uniformly square, which doesn't really make sense with the history the place has.

The Ruins of Greyhawk are just, well, dumb. Too many things that are designed to hobble a specific playing style, and too many areas that seem disconnected from one another.

I'm GMing Dwimmermmount again, and I have found that the limitation of this dungeon is in thinking of it as a center of civilization. There are no wide corridors for troops to march down, there are no plazas for marketplaces, and there are certainly not enough bathrooms for the supposedly hundreds or thousands of people who once lived here.

The population is finite, however. There is no restocking of the dungeon happening here. There are 61 kobolds. Once they're dead, they're gone for good. Any result on the encounter table for kobolds should just be replaced with the next option down. In this way, I've also rewritten the random encounter tables, the most dangerous foes are the highest rolls. Kill, defeat, and displace everything that is weak on one level and the only thing that remains are the predatory threats who have run out of prey and food.

The rooms are not static
It's easy enough to just use the descriptions of the rooms and apply some common sense as to what might be in one. There are orcs on this level, so why is this room empty? Let's put some orcs here and have them cooking a snail and moss stew on a small firepit. Where does the smoke go? Nobody has asked, but there a small holes in the surface of the ceilings designed for ventilation. Too small to crawl into, unless you're an insect. Where do the vents go? All over the mountain, it's a three-dimensional maze that is virtually impossible to map!

That's a key trait that I just don't seem to have. If nobody asks, why bother coming up with an explanation for it? Because if I think of it, I need to explain it to myself and then I have an explanation ready.

Who wants in?
I've created a few factions that are looking for passage into Dwimmermount. They're all hanging out in the local town for now, but as soon as the PCs return with orc heads and stories of dungeon delving they'll be making their way up to the gates, and become instant rivals for the loot to be found inside.

The Order of Cytophim. A secret society of magic-users who wish to ensure that Termax is dead and never coming back. They vow to use magic to preserve the Law, and punish those who wield spells carelessly.

Termaxian Cultists. People who believe Termax is still alive, that his godhood is imminent.

Dwarven outfitters. They believe the mountain should belong to them. It was a dwarven home before Termax moved in and displaced them!

Sken's Rogues. These guys are awful!

Queen Ilona. A Thulian descendant who wants to reclaim Dwimmermount as her ancestral home, and rule a new kingdom from it. Inspired by the PCs from the last game I ran in Dwimmermount.

Wait! You're GMing a new Dwimmermount campaign?
Oh! Yeah. Didn't I mention that? I started a new campaign two weeks ago and kicked it off by giving everyone Dwimmermount as an adventure I'd like to run again. We're playing using the Freebooters on the Frontier rules, which is a sort of OSR-ified version of Dungeon World (itself a D&D-ified knockoff of Apocalypse World).

I really like the system for two reasons:
1) it randomizes everything very neatly and in a not complex way that is easy to GM on the fly
2) it is very deadly and careless PCs will get FUCKING MURDERED if they don't take care of themselves

So, I really like Freebooters and I incorporated some elements from the Black Hack into it, and that's what we're playing with. We had one session and everybody really successfully killed some orcs but they made enough noise to draw the attention of some giant spiders and now we'll get to see if they survive the second session.

This is the picture I used for Muntburg, I forget where I grabbed it from: 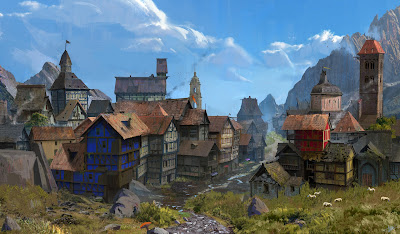 To summarize, my rules for GMing a megadungeon, or Dwimmermount, anyway:
Nothing is organized, the rooms and the creatures are wild and messy!
The population is finite, and can be killed off, displaced, or recruited/enslaved.
More people want to get inside!
Posted by Patrick Mallah at Tuesday, May 15, 2018