This picture was taken in June of 2008, and it was the first time I drank a 'swamp water' at the Pitcher's Pub. This was also the last time I saw my dad, about two years ago. 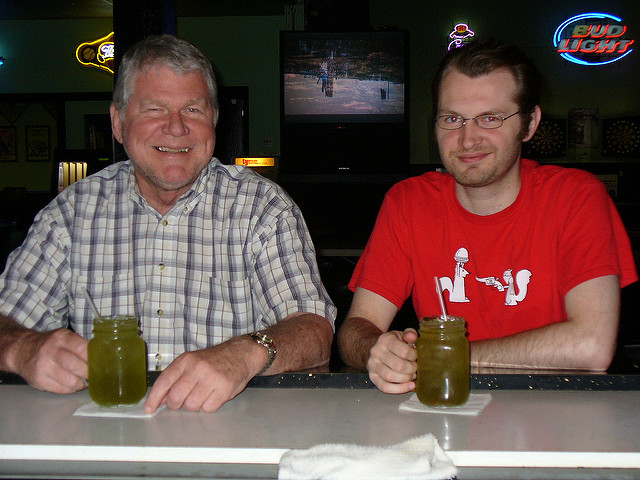 This week was the first time I've spoken to him in six months. I am not close with my family, as a general rule of thumb.

Here's how you can get your teeth fixed once and for all.

We'll get an estimate for all the work needed by my dentist out here in Scottsdale.
I'll make you an interest-free loan as long as you pay me back $100 per month until
it is paid off. That means if it costs $5000 to get them fixed, you will pay me back
$100 per month for 50 months (4 years 2 months). You miss a payment then 2% interest
will be applied to the balance. You miss 2 payments, the interest rate goes to 4% on
the balance, miss 3 payments and 6% get applied to the balance. If you miss more
than three payments then wage garnishment enters the picture.

You will have to relocate to AZ for this deal. It will take as long as my dentist thinks
it should take (2, 3, 6 months if necessary, his call). When the work is done, you can
go back to WI if you wish.

What's my reasoning? I know my dentist and he not a discount or cut-rate guy. He
is one of the best in the business and I trust his diagnosis before a dentist I don't know
in Madison. Two, you can get a better job out here while the work is being done than
you'll ever find in Madison competing with cheap university labor. This will make it
easier for you to pay me back. Three, you can always go back to Madison if you can't live
without it.

Think long and hard about it and let me know what you come up with.

I appreciate the offer dad, but those aren't terms I'm comfortable with. Please allow me to explain why, and I'm not even going to approach the whole "It tok me forever to find this dentist and I love him" viewpoint - but that one is certainly in there.

I've got lots of friends with parents. Divorced parents, still-married parents, single parents. Let me tell you a story about Ethan, because it's the most recent and it's the most clear cut example of parenthood I can find amidst all of my recollections.

Ethan and I were roommates a few years back, he's not from Madison, or even from Wisconsin (so he's not affected by any of that "liberal bullshit" that we have in this city) and his family are not academicians by nature. They were all mostly working class until Ethan and his sister went to college. Ethan's dad, who worked as an electrician for a long time, had three kids, divorced and re-married, had another kid; essentially, his dad is not a rich man, and he did have economic responsibilities. His dad came upon a large sum of money, I don't remember the particulars, maybe he sold a car or won the lottery, I don't remember. What was important was he suddenly had a boost of money, and he split it four ways amongst his children, and each child received roughly $2000. He didn't put any conditions on the money and he didn't say "I expect you to pay me back" - he simply had some money and gave his children the money. Ethan got a one page letter in the mail from his dad that told him about the money, asked him to use the money wisely and accompanied by a check for about $2000.

This display of behavior, more than anything else I can recollect from my life, is the stark difference between how the Vick family treats it's offspring and how every other family I am acquainted with treats their offspring. It not only shows the level of trust that he has in his son, but it also shows how he has no stake in retaining anything for himself. It's how a selfless, loving father bestows a gift of his affection toward his children when no display is called for or asked upon. Ethan knows that he could go to his father at any time and say "I need $2000 for school" or "to fix my car" or "to cover rent for the next two months" and he will get it, but he is loathe to ask because he has learned how to be self-reliant, and knowing the option is there is almost as good because it lends him a certain amount of confidence. He knows he can take care of himself, but if things get rough he always has the help of his family, whether it's his dad, or his mom, or his siblings.

The last time you told me that I could ask you for money, I didn't take you up on it. It was only after a year later, I had visited my dentist and was told how much work I needed done and I toyed with the idea of calling you for a month beforehand, but eventually I called you and told you how much money I needed. Your help came with a lot of requests for busywork on my part. "Get a print out of the estimate." "I want to send the check directly to your dentist." "I'm only going to give you half, your mother has to pitch in the other half if you're going to get any money from me." To put it simply, you didn't want to offer help, you wanted to make a deal. You felt it was half her responsibility to take care of my problem, which makes sense to me, but also fails to take into account all of the times she spent money on my teeth or my health without your help. You also didn't trust me to use the money for my teeth, which I don't understand but I brushed it off.

Your latest offer of help, which you e-mailed to me only two weeks ago, began with questions stipulating that I don't use vague words. Just straight up talk. I estimated what my future costs would be and you said "I was prepared to help out with that but there's nothing I can do if the situation is as dire as your response below." which basically means "I was going to give you some money, but since you need a lot I'm not going to give you any." or if I were to use a metaphor it's like telling somebody who is moving "I was going to lift one end of that couch for you, but it's bigger than I thought so you can carry it yourself."

The only thing I have ever been able to rely on as an adult is the fact that as long as she is alive I will always have a place to sleep, rent-free, at my mom's. My mom's horrible, disgusting house, where she is too lazy to clean, has become a stage-2 hoarder (google it if you don't know what it means), and she does nothing but watches TV and makes salads with too much dressing. Her house perpetually smells like a fart. I don't even like storing any of my belongings in her basement.

My point is this: I don't know what you want, but there are better ways of getting it.

If you just want to contrive a visit for me to Arizona, then tell me you love me, and you'd love for me to come out and visit you. Maybe offer to buy a plane ticket since I'm poor, and I'll say yes and come visit you.

If you just want me to get my teeth fixed because it pains you to know that I was raised by an irresponsible slob who never disciplined me as a child, then tell me you love me, and send me some money with the request that I use it to get my teeth fixed once and for all. And I will pay off my dentist, use any remainder as credit for future work and schedule another appointment.

Your dad may have been a jerk who never respected his children appropriately, but there's no reason why you have to behave like him. I know you're a better man than that. So like I said, I appreciate the offer, but no thank you.

We'll let this response of yours stand as a testament that you believe that handouts should be free and clear because some other kid got one. So be it! Subject is dropped. There will be no need for us to discuss it any further.

I love you too dad

this post was originally published on my livejournal, it is one of the few entries I saved when I migrated here to blogspot, these images are of the original comments because I wanted to save those too
(click on the images to make them bigger) 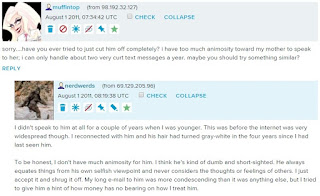 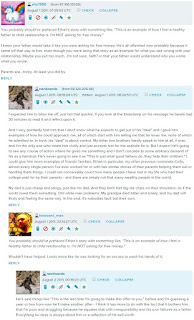 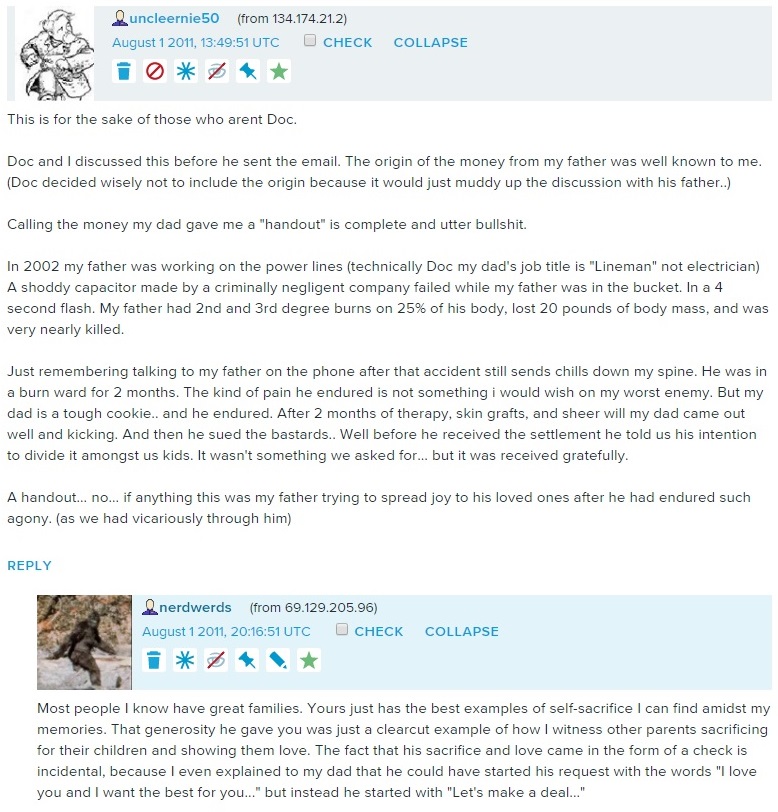 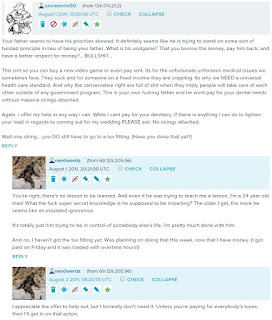 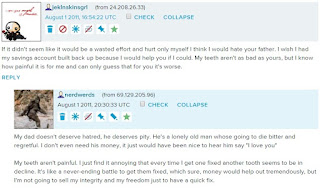 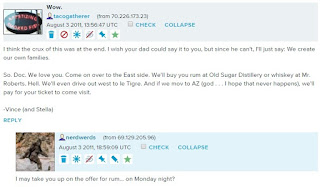 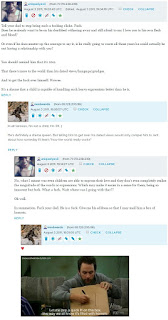 Email ThisBlogThis!Share to TwitterShare to FacebookShare to Pinterest
Labels: personal